The US Air Force has opened bids for a contract to figure out a way to set off a fleet of miniature, CubeSat, bombs, to inject plasma into the ionosphere, New Scientist reports.

The New Scientist story describes the ionosphere pretty poorly, so let me try to improve it.

The ionosphere is a section of the earth's atmosphere that's thin enough (from the altitude) that individual atoms are ionized by incoming solar energy and can exist for long periods as separate ions without recombining into neutral atoms.  It's generally considered to start about 50 miles up.  The ionosphere has multiple layers, generally named D for the lowest, E for the next highest and an F layer.  The F layer is capable of splitting under conditions of sufficient energy input into a lower F1 and higher F2.  Depending on conditions, the higher layers may not exist, or their density may be too low to be useful.

The way that radio signals interact with the ionosphere depends on the density of the layer, and the frequency of the radio waves.  During the day, the density of the D layer increases and lower frequency signals can't get through it.  Higher frequencies will go through the D layer and will be reflected back to earth by higher layers.  Something this illustration shows is that the highest frequencies that get reflected back to earth go to the highest levels of the atmosphere, the F1 and F2 layers, and result in reliable communications over the longest paths.  The problem is that if the solar activity is low (as it is now and will be for the foreseeable future), the F1 layer may not ionize sufficiently to reflect signals back at all.  Regardless of solar activity it's always the case that above some frequency, the ionization is too weak to reflect the signal back to earth, and the radio wave just continues into space.  At night, with the solar energy input removed, the F1 and F2 layers will essentially dissipate if the solar activity is low enough, and the ionization of all the layers will decrease.  The D layer becomes low enough density that lower frequencies can be reflected, and go longer distances.  You know this if you've ever listened to AM radio; at night, propagation changes and stations from a thousand miles away are readily heard while in the daytime, it's essentially local area only. To new hams: this is why 80 and 40 meters (3.5 and 7.0 MHz) are considered night time bands and only good for local contacts during the day.

What the AF is proposing to do is to directly create these ions to create the higher layers in the ionosphere, by injecting plasma from small CubeSat satellites.


As well as increasing the range of radio signals, the USAF says it wants to smooth out the effects of solar winds, which can knock out GPS, and also investigate the possibility of blocking communication from enemy satellites.

There are at least two major challenges. One is building a plasma generator small enough to fit on a cubesat – roughly 10 centimetres cubed. Then there’s the problem of controlling exactly how the plasma will disperse once it is released.

The USAF has awarded three contracts to teams who are sketching out ways to tackle the approach. The best proposal will be selected for a second phase in which plasma generators will be tested in vacuum chambers and exploratory space flights. 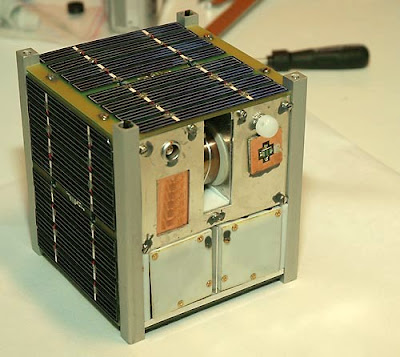 Plasma, of course, is an exotic state of matter.  Certainly not liquid or solid, and not exactly a gas due to its electrical properties.  It's ionized.  The three contractors have different proposals for how they'd generate the plasma, but nobody knows if any of the three would work, or if the Air Force's larger experiment would work.  Which is why we do experiments, after all.

Clearly, this is in the early days of the work and we're a long way from even figuring out if it can be tried, but it certainly is an ambitious idea.  It's just the sort of over-the-top idea that can be associated with greatness, or could be a flaming, disastrous, waste of time and money.  It will be interesting to keep an eye on this one.