That's the view of a column from Industry Observer Zvi Or-Bach in yesterday's EE Times online, and he makes a persuasive case.  In it, he points out two major trends: first, the cost per transistor stopped decreasing as semiconductor makers went through the 28 nanometer (28 nm) geometry in 2012.  (The size used to describe the semiconductor geometry is based on the smallest features in the part).  Today, the leading edge is 16nm, with Intel just announcing processors built to a 14nm process and talking about going to 7nm.

What Or-Bach points out in the graph on the left is that we can still produce smaller transistors at the finest geometries available, but they aren't cheaper.  The graph shows the number of transistors (in millions per dollar) at a certain geometry, versus the year.  The climb (more transistors per dollar) until 2012 is obvious, as is the graph going flat, indicating a constant number per dollar, then fewer transistors per dollar as the geometry shrinks from 20 to 16 nm and the curve tilts down.  Since the early days of semiconductor production, each generation brought smaller and cheaper transistors. 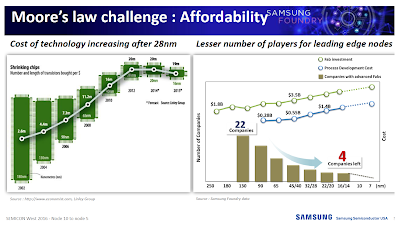 The right side of the plot shows another interesting trend.  At 130 nm, there were 22 facilities that made integrated parts with lots of transistors ("fabs").  Today, only four fabs in the world are capable of working at 16 and 14 nm.  Going to smaller geometries entails more expenses: investment in both physical facilities; i.e, machines and buildings, as well as investment in the processes; learning how to actually make things that work.

The reality of the industry, though, is that these ultra-fine geometries are the glamor side of the business.  The actual work is done by older, less fine geometries.

The graph on the left is showing that 43% of worldwide semiconductor production is in the five largest geometries: from 65nm up to the largest sizes used.  Further, the graph on the right shows that 85% of new designs are 65nm and larger.  Or-Bach takes this as evidence that the industry is bifurcating; very few designs move to the finest geometries while most designs are being designed into older, bigger geometries.  This is leading foundries to invest and develop enhancements to the older processes, keeping older facilities in production longer.

Saying that Moore's Law is over doesn't mean innovation is going to stop, but it does imply that the relentless trend of processors doubling in the number of transistors every two years is ending.  As we've noted before, processor speeds have been "stuck" at a few GHz for a decade or more.   We talked about 3D FLASH memory in this space back in January, and that's one example of innovations that increase density without going to finer geometries.  There are a lot of very clever engineers in that business, and I suspect we'll see more innovative approaches than just "transistor slinging" as it gets progressively less feasible to just throw more transistors at a design. 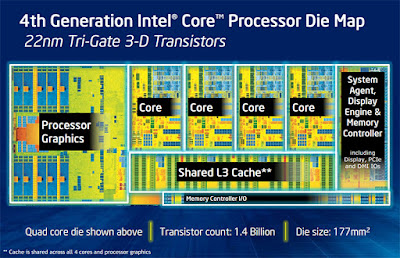