Last Monday, I wrote about needing to make the chip tray for my CNC mill, a tray to be made out of wood.  I have the tray complete now, including an error that was in the jpeg of the plans that were provided.  Here is is next to the mill that will eventually mount on it. 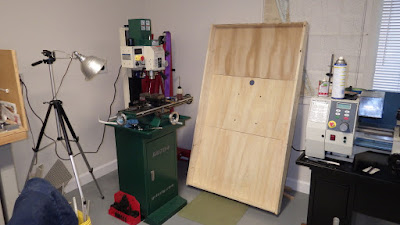 The error is in the placement of the drain hole for the coolant system, the large hole about 2/3 of the way up the tray.  The top in this picture is the left panel (a different grain pattern because it was a different piece of plywood) so it will eventually be on the left when looking at the mill this way.  Unfortunately, the hole for a sink drain is too close to the four mounting holes just below it.  I got the jpeg from the Hoss, the creator of the DVD I'm using, and it's right by the jpeg, but I found a video where he's building this system on his YouTube channel, and it's different than the jpeg.

Apparently, I need to patch that hole and put in a new one.  Alrighty then.  By the way, there's a saying among woodworkers that you can't have too many clamps: I'm here to tell you that's right.  There's six in use in this picture although only five are visible, and I could have used more.  These were needed to hold everything in place before I put in the first screw. 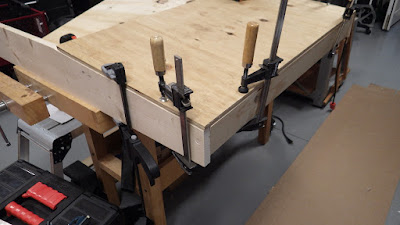