Yeah, the one mandated to be met by 2025 when it was put in place in 2012.  That one.  Yeah... it seems it was based on some assumptions that the world refused to go along with, and now the automakers are grumbling about not being able to meet it, and talking about trying to get the mandate knocked back a bit.

The EPA is having no part of any talk about lowering the mandated CAFE mileage.


During a speech Tuesday at the Center for Automotive Research Management Briefing Seminars, Chris Grundler, director of the EPA’s Office of Transportation and Air Quality, made it clear the agency is in no mood to move backwards.

The EPA is already looking beyond 2025 and believes dangerous climate changes will occur if greenhouse gas emissions are not reduced 80 percent by 2050 from today’s levels.

Which, according to everything I've been able to determine, would mean exactly nothing to global temperature - any change would be within the massive experimental errors in the system.  Which agrees with what at least one prominent "climate crusader" accidentally said on record once (about 35 seconds to 1 minute).  But let me ignore that for now.

The problem the auto makers is facing comes from precisely defining the Corporate Average Fleet Economy (the CAFE).  Cars are treated differently than trucks, and one of the reasons for the explosion of SUVs is that they are counted as trucks, while station wagons were counted as cars.  Not many station wagons are being made these days.  There is great legal wrangling and fighting over how to classify any given vehicle because not every vehicle has a prayer of hitting that kind of mileage.  The problem is that the projected fleet makeup for 2025 was based on the oil prices in 2010 to 2012, which were before fracking revolutionized US energy production and drove oil prices down.  Low gas prices have precipitated a strong consumer shift from cars to light-duty trucks and SUVs; American consumers love their larger, more capable vehicles. The shift to more trucks makes it more difficult for the industry to meet the government’s 2025 gas mileage target.


"They didn’t accurately judge the mix of vehicles,” noted Chris Robinson, research associate for Lux Research. “The government was thinking it would be 65% cars and 35% pick-ups and SUVs. They basically had it backwards.”

In this case, the brutality of CAFE is that the average has to be >54.5.  If you're selling 65% trucks to 35% cars, the cars have to be far above 54.5 MPG to bring the average of the trucks up that.  The trucks need to be pretty darned good, too.

It's a game of Chicken!  Who backs down first?  The EPA has the infinite checkbook of the Fed.Gov and no apparent sense of cost/benefit ratios; they see a target and they seem to have no sense of the costs involved.  Sort of saying, "whatever it costs to raise the fleet average to 54.5 MPG is worth it".  Bailouts aside, the auto makers don't have that infinite checkbook and are more bounded by reality.  How much will someone pay for increased mileage in their car or truck, especially since we're well on the curve of diminishing returns.  “If you have a truck that gets 10 mpg and you take it to 20, then the customer gets a big fuel-cost benefit,” Cole said. “But if you take it from 35 to 40 mpg, then the customer’s fuel savings grow smaller and smaller. And it may not be enough to offset the cost of the new fuel-saving technology.”  While the EPA estimates it will cost $1000 on average to get to the higher mileage, the industry is saying closer to $5000.  While both sides have an incentive to stretch those numbers a bit, I trust industry over the EPA any day.  They have to work with those costs, and ought to be more accurate than EPA spreadsheet jockeys.

So why talk about this now?  This is preliminary wrangling going on for an interim ruling the EPA has to make by April 1, 2018.  Analysts say fuel prices will probably be the key to the EPA’s conclusion.  As fuel prices go, they say, so go the buying decisions of the American consumer.  Whether or not that means anything to the tyrants in the EPA is really what remains to be seen.


“Ultimately, no one can control the type of vehicles that consumers choose,” Robinson told us. “The government can’t do it, and neither can the automakers.” 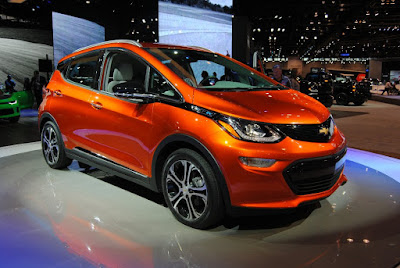 GM is counting on electric vehicles like its Chevy Bolt to push its CAFE numbers high enough.  They need to sell a butt load of these.  (Source)