I'm pretty sure that every piece I've talked about working on for my G0704 CNC conversion project has been metal.  For at least a little while, that has to change.  Before I take the mill apart and rebuild it with the pieces I've been making, I've got a lot of stuff to do.

Even if you're not familiar with power tools, it really shouldn't be mysterious that if you start with a block of metal and make it into something smaller, the stuff you cut away has to go somewhere, right?  If you cut a cubic inch of metal away, it becomes a cubic inch of waste that needs to be swept or vacuumed up!  You may not realize that cutting can throw chips long distances.  When I cut the central bores in my motor mounts, I went up to a 3/4" end mill from a 1/2" diameter cutter, and it would throw thick, long, curly strings of metal a few feet across the room.  It became a habit to make a pass or two with the mill, then vacuum like crazy.  Long stringy chips tend to catch in the shop vac hose and make a plug, so I sweep them up.  Still, I regularly find small chips and slivers that should be in the vacuum 10' away from the mill - whether they were thrown or stuck to my shoes, I can't say.

An enclosure for the mill will help with clean up and help keep the rest of the shop clean, so I've been studying mill enclosures on YouTube, and a couple of machinist forums since Saturday.  A bonus of the enclosure is that it makes flood cooling possible.  I've used the Grizzly at low enough cut rates that things haven't gotten too hot - and I've backed off when they have.  With the system open to the world, I can use a little oil or some sort of cutting fluid, but only a drop at a time, or very light spray, otherwise the walls, other machines, papers, and yours truly get splattered (DAMHIK, as they say).  With an enclosure, it's possible to put a sink drain in a low spot, with some filtering, so that you can flood cool the part and wash the chips into your bucket, filtering out the cooling solution to recirculate.  If you buy a commercial CNC system, they offer enclosures as either standard equipment or an option.  Take this Tormach PCNC 1100, something a small business would buy.  Or a hobbyist wanting to get started making parts and not making his machine. 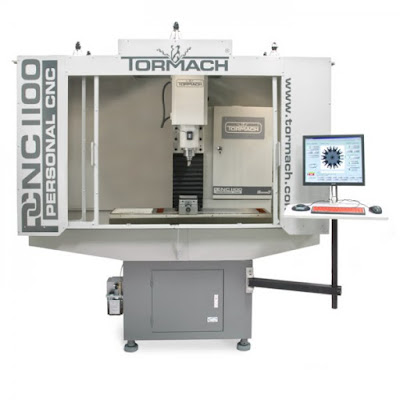 I've been studying ways to do this since Saturday, and there are some pretty impressive home made systems out there (a collection of photos).  I've settled on an approach like the seller of the DVD plans I'm working from has done.  It's different than the system on the DVD, but he's posted the new version to one of machinist forums, along with lots of videos.  I've spent a couple of hours drawing it in the CAD program, bought some wood, and I'm ready to start cutting the pieces.  Painting and sealing is mandatory - and has to be completed by the time I'm taking the mill apart and rebuilding it, so it's a high priority project.

In addition to doing this, I've got to build up my CNC controller box.  I have the stepper motor controllers, steppers, and I think I have everything I need, although I may be short of simple stuff like Cat 5 cable.  I even think I sketched a schematic at some point, or glommed together a few different pieces of schematic that I found.  The controller box needs to be running before I assemble the mill.  How can I tell if one my axes binds if I can't drive the motor to make sure?  Being a largely electrical job, this is going to be more like working on my home turf.  Then there's a computer.  I need to build, fix or completely resurrect a computer to run the motion control software.

While the mill is apart, I'll be adding a system to pump a little oil into a handful of places: ballscrews, and where metals slide over each other.  I have the oil fittings, or at least some of them, but there are parts I need to get on order for that task.  Yeah, I've been trying to read up on how people do that, too.  When the mill is being reassembled, there's stuff to be added and wired into place besides the stepper motors: limit switches, power to the cooling and oiling systems.  And probably things I'm forgetting.

That's actually all that I have planned now.  When these things are done, sometime in the next few months, I'll have a CNC'ed, 1HP mill.  It should make finishing an AR lower an afternoon job, instead of a couple of weeks like my first one.  I hope it ends up having all been worth it.  There are other popular mods for the system: ways to run the spindle faster, including a higher power motor for the spindle, and automatic tool changers.  I can't say I'm really going to do any of those, but having a tool changer is a BIG step up from doing everything one tool at a time.  Higher power is a like a bigger machine.  You always want higher power, just like you always seem to need a machine a couple of inches bigger in some dimension than what you have.  At some point you have to live with it.

This is how I spend my weekend afternoons and evenings.  Studying these questions.  How about you?