The Biggest Story That Didn't Make the News

Long time readers will know that I retired in December from a company that I called Major Avionics Corporation - for the same reason I don't use my real name.  I didn't want anyone thinking anything I said was official policy, or opinion of my employer.  Most people are unaware of what avionics is, the dictionary definition is "electronics applied to aviation" and that's a good summary of what we did.  Everything from communications radios, to collision avoidance systems (also radios), weather radars (ditto), navigation radios and more; but also things like the pilot to cockpit intercoms, with their characteristic "bing bong" tones, to inflight entertainment systems (Cable TV on a plane) to, well, anything electronic that got put on an airplane. Given that list, you might see why it was a good place to be a radio designer for 20 years.

That means that for 20 years, I worked in the aviation industry, and I think that like most of us, I'm proud of the industry.  That's why I think this aviation story that didn't make the news much, if at all, needs to be highlighted.  Yesterday, an Emirates Air Boeing 777 apparently landed in Dubai with landing gear problems, or its gear wasn't deployed at all.  The aircraft burst into flames and quickly burned halfway to the ground.


Despite this tremendous mechanical violence, all 300 people aboard escaped with their lives.

Unfortunately, there was one fatality: one of the firefighters dousing the plane was killed.  There were no reports of serious injuries, such as broken limbs or serious burns.  I'll bet that's why this story barely got picked up at all.

So how does an airplane the size of a 777-300, nearly 250' long and probably weighing a half million pounds, carrying 300 people (passengers and crew) essentially crash on the runway, slide hundreds or thousands of feet, dragging one of its huge Rolls-Royce engines behind it, then erupt in a fireball, and not one soul on board dies?  Two words: engineering and training.  Engineering for all the changes made to aircraft design to make crashes more survivable; training for the crews who train relentlessly to get everyone off the plane.


Airplanes must be evacuated within 90 seconds, a feat flight attendants are rigorously trained to achieve. That means passengers have a fighting chance to flee an airplane before fire and smoke can engulf it.  In addition, the Federal Aviation Administration has invested enormous resources into studying emergency airplane “egress,” including an Oklahoma City laboratory specializing in such flight-safety issues.

The placement and size of exits to get everyone off an airplane in under 90 seconds is a subject of engineering effort.  Think of the Airbus monster double decker A380.  During their evacuation test, 853 volunteer "passengers" and 20 crew members left the aircraft within 78 seconds. (No, they can't use trained "evacuation test takers")

The thing is, yeah, this is a remarkable incident with 100% survival, but remember the Asiana flight 591, also a 777, that landed before the runway's landing zone at San Francisco in 2013?  That plane clipped a seawall, flipped and then burned nearly to the ground. Only three of the 291 passengers on that flight died—a 99 percent survival rate—while the jet was destroyed.  I don't want to sound like I'm making light of the terrible tragedy for those families, but when you consider the magnitudes of the forces involved, and the mechanical chaos going on, that's still pretty darned good odds for survivability.

It's not just the overall strength of the airframe, and designing the attachments of seats to the airframe to take up to 16 G loads.  The seats on aircraft used to release toxic fumes when they burned.  Airplanes built after 1990 must also meet standards on how much heat is released from materials in a fire and the density of smoke the fire produces.

Lastly, the professionalism of the flight crews can not be ignored.  Too often, we think of flight attendants as "waitresses at 35,000 feet".  During quiet times they may be, but they also train hard to be able to get everyone off the plane in under 90 seconds. 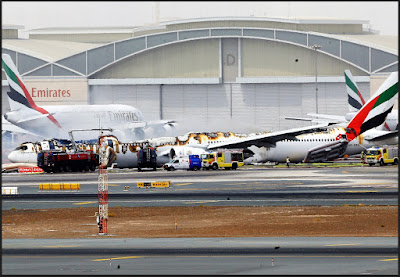 Civil aviation isn't one technology; it's many.  Perhaps the most taken for granted technology there is (Louis CK has a famous comedy bit about this).  People expect to get into their pressurized aluminum tube, fly in an environment that would kill them if they were exposed to it for a brief time, and then get off the plane later without a nanosecond of inconvenience or discomfort.  With incredibly few exceptions, they do.  A flight not ending up where it was supposed to go is so unusual it always makes the news; either a lost plane or a lost pilot landing at the wrong airport.  The system just works, the vast majority of the time.  I'd like to claim the avionics industry added something to surviving this sort of accident, but this is entirely on the airframe makers.  They're the heroes.