I've been sitting on this post for a long time.  One year from today, Monday August 21, 2017 comes the best chance most of us will have to see a total solar eclipse, one of my top bucket list items since I was a teenager. 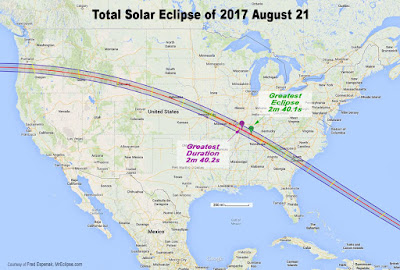 This screen capture shows the path of totality, with the centerline being the peak of the eclipse.  The two highlight boxes show that the eclipse geometry favors the SW corner of Kentucky and SE Missouri, giving those places the longest duration of totality and greatest eclipse (" the instant when the axis of the Moon's shadow cone passes closest to Earth's center"), but if you go to this interactive web site, you can get numbers for anywhere on that path.  Few people are fortunate enough to live on the path of totality of a total solar eclipse, but this one goes through fairly well-populated areas of the southeast, hitting Charleston, SC; Nashville, TN; SW St. Louis, MO; Columbia, MO; and Kansas City, MO.  The path of totality is also within an easy drive of Atlanta and a ton of other cities.

The better question is where's the best place to see it?  By that I mean, that combination of view to the horizons and weather, which is the most important of all.  The Greatest Duration and Greatest Eclipse points are at 1821 and 1825 UTC, respectively, and that's 1:21 PM (MO) and 1:25 PM (KY), both CDT, the local times.  If you're from that area, what's the weather like at that time of day in late August?  Around here, there's probably an increased chance of clouds and showers compared to earlier in the day.  I'd guess storms might be brewing that time of day there, too.

The path, however goes across the entire lower 48; the shadow of the moon enters the  US near Depoe Bay, southwest of Salem Oregon, and proceeds easterly, leaving the mainland near Bulls Bay, SC, NE of Charleston.  For example it crosses virtually over Jackson Wyoming at 1736 UTC, where it's 11:36 AM local time (UTC -6 for MDT).  I would guess the weather would be better in Jackson Hole, than in SW Kentucky, but I don't know that.  Note that even as far away as it is from the point of greatest duration (2 min 40.2 sec), the duration in Jackson Wyoming is 2 min 16.6 sec, not a bad compromise if the weather is likely to be much better.  In general, the closer to the centerline on the map you get, the greater the duration, but you must be between the blue lines on the map to see totality.  A viewer in Nashville, off the centerline, sees 1 min 53 seconds of totality instead of the 2 min 40 on the centerline.  Within a few miles SW of Nashville, that goes to zero as the eclipse becomes partial.

If you have the freedom to move around to find the best weather based on last minute forecasts, plan to follow the centerline as much as you can, and go east/west as necessary.

Posted by SiGraybeard at 4:39 PM