The news broke this weekend that Iran had executed a nuclear scientist on charges of being a US spy.  The Blaze carries this AP story:


The official IRNA news agency quoted a spokesman for Iran’s judiciary, Gholamhosein Mohseni Ejehi, confirming the execution of Shahram Amiri, an Iranian nuclear scientist caught up in a real-life U.S. spy mystery who later returned to his home country and disappeared. He did [not] say where or when the execution took place, but said Amiri’s initial death sentence had been reviewed by an appeal court and that he had access to a lawyer.  [the word "not" added - SiG - seems to have been what the AP writer meant]

According to the Washington Examiner, it appears he was mentioned in Hillary's emails, which we have all assumed have likely been grabbed from her private server by "foreign interests".


"I'm not going to comment on what he may or may not have done for the United States government, but in the emails that were on Hillary Clinton's private server, there were conversations among her senior advisors about this gentleman," he said on "Face the Nation." Cotton was speaking about Shahram Amiri, who gave information to the U.S. about Iran's nuclear program.


Iran confirmed on Sunday that Amiri had been hanged for treason. He was convicted of spying charges in a death sentence case that was upheld on appeal, according to the Associated Press.

"This person who had access to the country's secret and classified information had been linked to our hostile and No. 1 enemy, America, the Great Satan" a spokesman for the Iranian judiciary said. "He provided the enemy with vital and secret information of the country."

Personally, I wouldn't doubt there's a long trail of blood related to those emails.  It's what you expect when "sources and methods" are revealed.  Iran appears remarkably straightforward about this, showing their legal process and that it was a fully legal execution; in the sense that it was court-ordered and after having gone through the full legal rights of Iranian citizens.  I'd be less than surprised if certain other people whose names were in those emails just became missing persons, or mysteriously fell out of windows, or off buildings.  Like reporters in Russia. 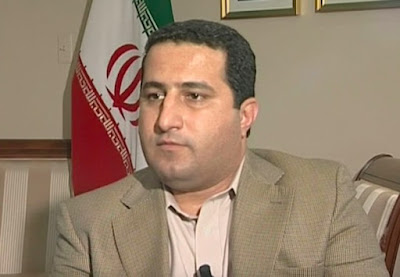 Posted by SiGraybeard at 2:23 PM