Cardio May Be Killing You - Part 2

Part 1 was way back, one month short of five years ago.  First, a short refresh.  The main thrust of the article concerned data from a radiology study, that was written for popular press by Kurt Harris, M.D..  In brief, when distance runners who did three marathons a year were compared to sedentary people, which even included some smokers, the runners showed more evidence of so-called "silent" heart attacks and had more damage to their hearts than the other groups.  The runners were slimmer and (of course) fitter, but their hearts were in worse shape than sedentary people.  From a heart health standpoint, they were less healthy than the ones who sat around - and how often have you heard or been told by a doctor not to be sedentary?
Dr. Harris said that the evidence was strong enough to convince him to change his behavior.  He switched to running a 5k (~3 miles) a few times a week just for fun, and abandoned the "more is better" belief about cardio that is absolutely pervasive in our society.

Given that as background, and as I said at the time my tendency to listen to "alternative" nutrition/health podcasts, I ran into some data on one of them that I've researched somewhat, and I think it's real enough to add a Part 2 to the previous post.  The interviewee I was listening to was Mark Sisson, one of the founders of the paleo diet and exercise movement.   Sisson was a world-class marathoner and triathlete before he quit.  He long decried what he called "chronic cardio" - getting on a bike or running until heart rate is 80% of maximum and sticking it there for hours.

One of the most common heart arrhythmias is atrial fibrillation, or afib.  Afib can be very uncomfortable, but most importantly it raises the risk of stroke.  One source I saw said it's the leading cause of stroke in America.  It turns out that doing extensive cardio exercise not only can cause the silent heart attacks mentioned in '11, it can damage the heart in ways that cause afib.  In this 2013 article, on a peer-reviewed medical practitioner's page, they say that afib is 5 times more common in endurance athletes than the general population.  That may be a low estimate.  The risk is greatest for people who start their vigorous exercise programs (defined as >5 hours/week) when they're over 30.  Sisson said he has afib, many of his contemporaries have it and went so far as to say it's endemic in over-50 ex-athletes.  I spent most of my exercise time for a decade or more doing exactly that, from the mid-90s to the mid 2000s.  Typically 5 or 6 days a week, I'd nail my heart rate high and just crank out the miles.  A few years ago, after some weird chest sensations, I was told I have afib, and an older friend who was a runner for his entire adult life has it.  (I've never had symptoms as bad as my friend).

In this article from a cardiac electrophysiologist and bike racer, he talks about the bitter truth about this situation.  Once the heart is damaged, it's damaged irreversibly.  There are two main treatments for afib: anti-arrhythmia drugs and a surgical intervention that either "spot welds" areas of the heart together, to break up the problems causing the afib, or cryoablation that freezes and "burns off" that heart tissue.  Either one of these is a Big Deal, and while they don't crack your chest open as in the case of bypass surgery, they feed a catheter carrying instruments and a camera up the femoral artery into the heart.  It's done under general anesthesia.  The drugs bring bad side effects to some people, but work for others.  The ablation treatments sometimes fail and need to be redone.  My friend had cryoablation twice, and it seems to be holding up.

Don't make the mistake of suddenly stopping your exercise program.  In a study at the Karolinska University Hospital, in Stockholm, Sweden, they collected information about physical activity from 44,410 Swedish men from the ages of 45-79 who did not have atrial fibrillation.  They found a U-shaped curve of exercise vs. risk of afib.  The lowest risk was at 2-3 hours per week. The risk was highest in those that started >5 hours of vigorous exercise after the age of 30.


In men who exercised >5 hours per week at age 30 and quit exercising later in life or regressed to <1 hour per week, the atrial fibrillation risk increased further to 49 percent. The increased risks remained even when accounting for all types of heart disease and heart disease risk factors; diabetes, high blood pressure, and being a smoker.

These authors made a second important observation. They found that leisure activity of walking or cycling did not increase risk, even if it was over 60 minutes a day. In fact, walking over 1 hour per day was associated with a 13 percent decrease in atrial fibrillation. This lower risk of atrial fibrillation was seen in almost all of the groups and was independent of what age the activity was started. In fact, becoming more active with low-moderate intensity exercise helped lower all traditional risk factors of heart disease as well as atrial fibrillation.

The thing about this that bothers me the most is that this research goes back at least as far as 1993, and I don't see any messaging anywhere saying there are negative risks associated with doing this sort of cardio workout, and to be especially careful if you're over 30 and start running (or riding).  Likewise I've never seen the advisories about running marathons I talked about five years ago.  Personally, when someone tells me "irreversible heart damage", I don't like those words.  I suppose some group or other thinks it sends mixed messages when they believe they can't get the majority of people to exercise at all.

I don't like closing an article like this with no signs of hope, so let me reiterate that leisurely walking or cycling was associated with a reduction in afib.  It appears that a leisurely walk around the block/neighborhood, a few times a week, or every day, is the best thing you can do - at least as far as afib is concerned! 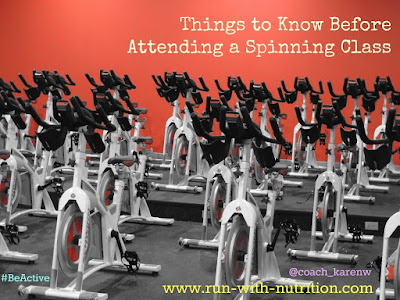 (with all due respect to the folks I got this image from, the most important thing to know before attending a spinning class is DON'T!!!)