It Doesn't Matter If We Call It a $400 Million Ransom

It only matters what hostage takers, in this case Iran, call it and they call it a ransom.  If kidnappers think it's a ransom, you can bet there will be more kidnappings.


Iranian leaders claimed in January that the payment was indeed a ransom.

“This money was returned for the freedom of the U.S. spy and it was not related to the [nuclear] negotiations,” Iranian Brig. Gen. Reza Naqdi told Fars News, a mouthpiece of the Islamic Revolutionary Guard Corps, in January.

If you're an American working overseas, for God's sake watch yourself.  I'll just echo the standard advise to step up your situational awareness, and try to stay in groups where you can watch each others' backs.  The obvious potential is for Iran themselves, but any of their sycophants like Hezbollah or even "lone wolves" (I'm getting to hate the phrase) could start grabbing Americans for dollars. 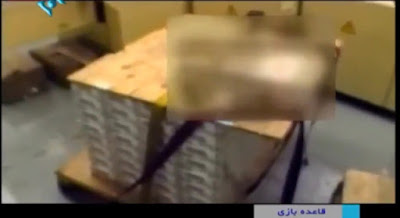 TV Screen capture of Iranian TV showing off their payment.