A slight detour away from the gun control, economics and politics that consumes so much energy, over to the realm of sci-tech.  Within the last week, the story has surfaced that a new form of lightning has been recognized: dark lightning.  Dark lightning is not a conventional flow of electrons, a massive spark between cloud and ground, dark lightning is a discharge of gamma rays.  Every school child knows the story of Ben Franklin flying a kite to attract a lightning strike (Franklin, clearly no fool, was not standing outside in the storm, the kite was tied off to a structure).


Unknown to Franklin but now clear to a growing roster of lightning researchers and astronomers is that along with bright thunderbolts, thunderstorms unleash sprays of X-rays and even intense bursts of gamma rays, a form of radiation normally associated with such cosmic spectacles as collapsing stars. The radiation in these invisible blasts can carry a million times as much energy as the radiation in visible lightning, but that energy dissipates quickly in all directions rather than remaining in a stiletto-like lightning bolt.

Gamma rays are quite energetic, but are just photons; at lower frequencies (lower energies) photons are visible light.  At still lower frequencies, photons are radio.  But these bursts of energy in thunderstorms are enormously powerful, almost as powerful as stellar events.  Until now, there was no acceptable theoretical physics to explain how this could be.  Dr. Joseph Dwyer of the Florida Institute of Technology and colleagues presented a paper at a press conference meeting of the European Geosciences Union in Vienna, Austria, April 10, showing that they've created a physical mod that can explain it.


According to their model, instead of creating normal lightning, thunderstorms can sometimes produce an exotic kind of electrical breakdown that involves high-energy electrons and their anti-matter equivalent called positrons. The interplay between the electrons and positrons causes an explosive growth in the number of these high-energy particles, emitting the observed terrestrial gamma ray flashes while rapidly discharging the thundercloud, sometimes even faster than normal lightning. Even though copious gamma-rays are emitted by this process, very little visible light is produced, creating a kind of electrical breakdown within the storms called "dark lightning."

In this illustration, from NASA by way of PopSci  the pink represents the spherically expanding gamma rays, and the yellow represents the positron stream, both diverging from the thunderstorm at bottom center.  The white circle is the moon: 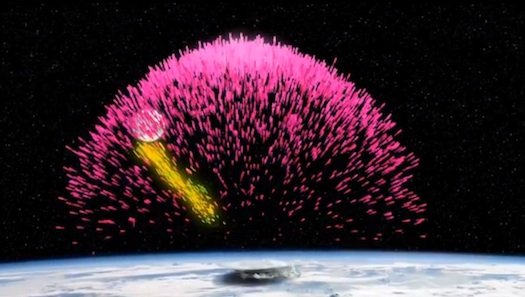 Because of the association with thunderstorms, it's believed that airliners may occasionally be struck by dark lightning.  Not every thunderstorm can produce this level of energy, but it's considered possible that passengers in a commercial aircraft can be given a large dose of energy from a dark lightning event, perhaps equal to a year's allowed dose of radiation.  For comparison, in the industry we say that the commercial air transport-class jets get struck by conventional lightning once a year.  That's an average with the number depending on where they fly and a lot of other variables.  (click here for a well-known video of an ANA 747 being struck by lightning on take off from Tokyo.)  We design systems to withstand and play through rather outrageous lightning events.   It might surprise any radio hams or hobbyists out there that modern avionics radios play through direct lightning strike to the antennas.  You'll hear a burst of noise during the strike but that's the only service degradation they'll allow (it's pretty much unavoidable).

Dark lightning is a new one on me, though.

The work here is very new and the physics isn't really well understood.  Quoting the overview in the Washington Post again:


According to gamma-ray researcher J. Eric Grove of the Naval Research Laboratory in Washington, the gamma-ray flashes that Dwyer’s model describes match closely the best recent satellite measurements of thunderstorm emissions of these high-energy rays. But he also notes that recent data from an Italian satellite implies that thunderstorms might be producing gamma-ray flashes far more energetic than Dwyer’s theory can account for, adding mystery even as it helps confirm dark lightning’s existence.

It just strikes me as very cool that thunderstorms are capable of this much energy.  Cooler yet that new natural phenomena are being discovered and fundamental physics about how the world works is still being discovered.