It's interesting that two people whom I respect both talk about the chances that the North Koreans do something - probably something really stupid - soon.  The official name is the Democratic Peoples' Republic of North Korea, DPRK.  Old NFO writes "An Opinion":


And I truly hope that I am wrong with this one…

But I ‘think’ that DPRK is going to shoot ‘something’ on the 10th, if it is nuke (and there is activity around the tunnel) there wont be much response possible.

He then goes on to speculate on a few possible scenarios.  He doesn't mention this, but South Korean media is reporting DPRK submarines have left their bases and there are reports of numbers stations on DPRK frequencies.  These are assumed to be transmitting information or orders to DPRK operatives "somewhere".  (Numbers stations are shortwave stations that broadcast just a voice reciting lists of numbers.  It's a low tech, low risk way of passing information to undercover agents.  Some information here.)

And Ol' Remus at the Woodpile Report, a gentleman who typically writes longish, compelling pieces, writes on the very same subject.   Now, the way his blog works, this just a link to the top and it will scroll off the bottom within a day or two, so I'll grab a few morsels.  You should RTWT.


This is information from sources ol' Remus uses to judge speculations about an EMP missile attack by North Korea. This isn't expert analysis, it's a layman's understanding of it. And how much of public information is disinformation, or is just plain wrong, can't be known by your average Dick Tracy hat-wearing, pipe smoking, superannuated hillbilly. Even the best of it amounts to good faith guesses by western experts, but even so, in this life y'gotta be willing to be surprised. Again and again. Before Pearl Harbor, Japan's carrier-based air power was said to be low-tech knockoffs of western designs. Then we met the Mitsubishi A6M Zero and the Long Lance torpedo.
...
North Korea's stockpile is generally estimated to be be fewer than ten weapons although some say more. They claim to have tested five, only three have been verified, all low-yield, the largest at 40 kt as the upper estimate. Nuclear EMP warheads produce significantly less explosive blast than "conventional" nuclear warheads. While a yield of 10 kt is sufficient to generate a useful pulse, 10 or even 40 kt is far short of what's needed to black out the continental US. It's considered enough to shut down an urban region 'though. Expert opinion varies as to the extent and duration but no one ever went far wrong ignoring official optimism. Most urban regions are thisclose to a blackout as it is, an EMP could actually improve things.
...
With adolescent adults in our halls of power busy taking revenge on reality, the hard cases of this world have a once-in-a-generation opportunity to surprise us. Pearl Harbor and the attack of September 11th 2001 argue against dismissing North Korea's threat outright. It may be posturing, it may be imminent. As with any aggressor, beware the lull. And stay away from crowds.

It's already the 10th over in the DPRK, so if Old NFO meant 4/10 over there,  it's mid-morning as I type this.  Ol' Remus doesn't put a date on it, but raises some excellent points, the best is that last paragraph.  We have adult adolescents in charge, ex-60s radicals like Ayers and those pathetic idiots, who project neither an air of competence or strength.  It's the kind of environment that encourages other adult adolescents, like the son of Glorious Leader who never led anything before his country.  Come to think of it, that's a good description of our Glorious Leader, too. 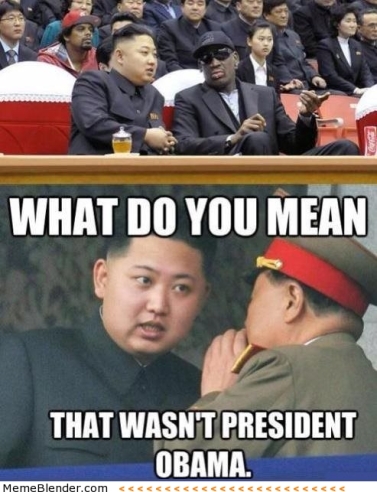