On this annual pagan religious celebration of Gaia, some odds, ends, a partial repost and new plagiarism!

Earth Day, as most of you know, is a holiday made up in the late 1960s at the start of the national environmental movement.  Ira Einhorn is one of the main founders of Earth Day, if not the guy who started it.  Ira practiced what he preached: he murdered his girlfriend (less stress on the planet) and composted her body in his closet.  (Hey - reduce, re-use, recycle!)

The movement led to the creation of the Environmental Protection Agency, probably the best example of an agency that has outlived its usefulness.

I suppose the ethos of modern America requires that I say I consider myself an environmentalist.  Long before 1970 and ever since, I've been a fisherman, hiker, camper, cyclist, runner, biathlete (I'm a really crappy swimmer...) and outdoor photographer.  I want a clean, healthy environment.  Nobody wants dirty air or water, nobody wants pollution, nobody wants to make themselves or their children or anybody else or anybody else's children sick.  Can we get away from those useless stereotypes and be grown ups from now on?

That said, 95% of being environmentally responsible is cleaning up after yourself.  Most of the rest of that last 5% is recognizing "there is no such place as 'away' where you throw things".  All you do is relocate your problem from right under your nose to somewhere else.

I don't think there's anyone alive who remembers the 1960s that doesn't think we're better off today than we were then.  The laws removing lead from gasoline and paint removed tons of the metal from the environment.  Removal of combustion products of Nitrogen from vehicle exhaust, reduction of sulfur emissions at power plants, and mandating catalytic converters to remove heavier combustion products are all big steps.

..... (rather than repost the whole thing, here's a short version of the part on using Vilfred Pareto's law to methodically find and reduce or eliminate sources of problems.  Chart your problems, smallest to largest.  Go after the 20% of the sources that cause 80% of the problems until you knock them down to minor contributors.  Lather, rinse, repeat.)

The EPA is there.  I would argue that when the things on their list to clean up are small engines that are rarely used like lawnmowers, or personal boats, the pollution problem is essentially solved.  While I know a lawnmower can produce some visible exhaust, compared to cars and buses running five days a week or more, the total amount they contribute is a tiny fraction of what we started out cleaning up.

The EPA proudly lists a lot of its accomplishments.  There's a lot of items in that list that are more "hall of shame" than "hall of fame".  Take the CFC bans they brag about.  This science has all but fallen apart in the years since the ban, sure evidence that they jumped onto a bandwagon rather than waiting for good science (I love the conclusion to that Science paper, "we don't know what we're talking about and none of our theories work, but don't doubt the conclusions that CFCs are to blame!" - yeah and frogs with no legs are deaf, too)  It has been suggested that the whole CFC ban and Montreal Protocol was expert manipulation of the governments by Dupont Chemical, because their patents on Freon 12 were going to expire and they invented a way to get the world to come to them for the solution, R134!  Does that give you much confidence the EPA regulating carbon dioxide is anything other than a handout to some groups or some people that are going to profit wildly from carbon restrictions?

DDT?  How many people were killed by the absence of this cheap, effective malaria preventer (by killing the mosquito vectors)?

"[Any known alternative to DDT] only kills farm workers, and most of them are Mexicans and Negroes. So what? People are the cause of all the problems. We have too many of them. We need to get rid of some of them and this is as good a way as any," said Dr. Charles Wurster, chairman of the Environmental Defense Fund's Scientific Advisory Council and a key promoter of the DDT ban.

I have to tell you that those people feel differently, Dr. Wurster.  Perhaps you and your fellow travelers will do the planet the favor of offing yourself first?

But go back to that EPA accomplishments page.  They say:


EPA bans use of DDT because the widely-used pesticide is found to be cancer-causing and accumulating in the food chain...

Contrast that with (source):


"The scientific literature does not contain even one peer-reviewed, independently replicated study linking DDT exposures to any adverse health outcome [in humans]," said Dr. Amir Attaran, who is with Harvard University's Center for International Development and is a former WHO expert on malaria who used to support the environmentalists' call for using alternatives to DDT. Attaran changed sides on the DDT debate after he witnessed what happened when South Africa. After intense U.N. and environmentalist pressure, South Africa stopped using DDT and switched to the U.N. Environmental Program's alternative pesticides as a way to control malaria. But the mosquitoes quickly developed resistance to the new pesticides and malaria rates increased 1,000 percent....


Not afraid to put his mouth where his moxie was, Edwards took to swallowing a tablespoon of DDT on stage before every lecture on the subject. In September 1971, Esquire magazine pictured Edwards doing just that. The accompanying text explained that Edwards had "eaten 200 times the normal human intake of DDT." He did not even consider this gesture risky. In the one year of 1959, for instance, unprotected workmen had applied 60,000 tons of DDT to the inside walls of 100 million houses. Neither the 130,000 workmen or the 535 million people living in the sprayed houses had experienced any adverse effects. (emphasis added - Graybeard)

These two examples, gathered in a couple of hours of thought and searching, tell me the EPA is a political body that gets the occasional thing right, but has outlived its usefulness.  Perhaps there's some use for a skeleton crew to administer a few things, but No. New. Regulations. Not. One.  Shutter the windows and bar the doors.  Mr. Speaker, if you're looking for an agency to zero out in the budget and save some money, look no further.

From John Ransom at Townhall.com, Celebrate Earth Day by Expanding our Carbon Footprint.  A collection of 10 easy steps to creating a bigger carbon footprint, because anyone who is intellectually honest admits it doesn't matter.


9) Use a Metro Light Rail system instead of your car.

Yes, the model for renewable energy development in the industrial world has yielded impressive results. And they do it by subsidizing a new, technological breakthrough that’s coming to you very soon. Yes, very soon we’ll all be able to power our electric vehicles through coal-powered plants that supplement coal with the use of wood. (emphasis added)

Who can forget the day the people who Occupied Wall Street in order to save the world left behind 26 loads of garbage?

“I pick up garbage [for a living], and these were some of the worst smells I’ve ever experienced,’’ one sanitation worker told the NY Post.

And finally, some quotes from the first Earth Day in 1970:


“Population will inevitably and completely outstrip whatever small increases in food supplies we make. The death rate will increase until at least 100-200 million people per year will be starving to death during the next ten years.”
Paul Ehrlich, Stanford University biologist

“By…[1975] some experts feel that food shortages will have escalated the present level of world hunger and starvation into famines of unbelievable proportions. Other experts, more optimistic, think the ultimate food-population collision will not occur until the decade of the 1980s.”
Paul Ehrlich, Stanford University biologist

Dr. S. Dillon Ripley, secretary of the Smithsonian Institute, believes that in 25 years, somewhere between 75 and 80 percent of all the species of living animals will be extinct.” Sen. Gaylord Nelson

“The world has been chilling sharply for about twenty years. If present trends continue, the world will be about four degrees colder for the global mean temperature in 1990, but eleven degrees colder in the year 2000. This is about twice what it would take to put us into an ice age.”
Kenneth Watt, Ecologist 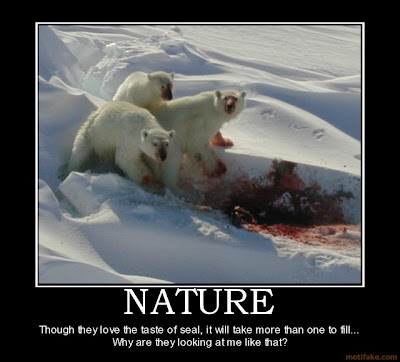 Remember, to really commemorate Earth Day, your lights should be visible from Proxima Centauri.

Posted by SiGraybeard at 9:00 AM