As in catching up.  Tab clearing.

There was a Fun Show in town this past weekend and Mrs. Graybeard and I dropped by Saturday afternoon.  There was no line and the crowd wasn't overwhelming.  The last one we went to was the last weekend of December (there's usually one a month here in town) and it was more crowded.  I was wondering what I'd see on ammo prices and the shock started early.  The first seller I saw with 500 round bricks of .22LR on his desk wanted $65/box for them.  We kept moving.  A dozen tables away, another seller was asking $95/box. The cheapest box of .45ACP 230 grain FMJ I saw was about $35.  Most was closer to $45.  9mm 115 gr. ball was $20-ish for box of 50.  .223 was closer to .75/round (in the common 55grain FMJ).  There was ammo, it was just 2x to 3x the prices from before the Schumer storm started.

ARs seemed down in price from the December show and they were everywhere (as fits "America's Rifle").  I saw several "bare bones" ARs in the $900 to $950 range, and the higher end guns seemed pretty reasonably priced.  I should have written down more prices, but I seem to recall Bushmasters at $1250 or $1500 - pretty reasonable for those guns.  Nobody was giving them away, but nobody was asking for body parts in trade, either.

Hunting guns were there in number, as bolt guns have not been as popular as semiautomatics.  I saw a Savage Axis XP in .308, that really caught my eye and made me go sit and think about getting it (I didn't) but not at Bud's price here, at full list price of $420.  Bolt rifles seemed pretty much unaffected by the price hits that black rifles are getting.

Yeah, I still have my unrequited lust for something like a Scout rifle and still haven't gotten around to doing it.  I like 308 as a cartridge and Colonel Cooper envisioned a nice configuration.  From what I know, the choices are the Ruger Scout and the Savage 10 FCM - unless you have really deep pockets.  Savage has their "Accu-Trigger"; but I have no idea if it's worth going for.  Ruger's offering is more expensive, but a quick check of a couple dealers show magazines are cheaper (but all are out of stock).

Got this in the daily email.  He has a point. 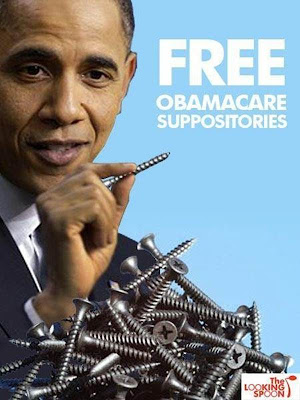 Lastly, CA at WRSA links to this article in the NY Times that has gotten some buzz; it's by David Stockman, former director of the Office of Management and Budget under Reagan.  Stockman tells a lot of important truths about the economy and it's worth reading.  Written last week (3/30) he begins:


The Dow Jones and Standard & Poor’s 500 indexes reached record highs on Thursday, having completely erased the losses since the stock market’s last peak, in 2007. But instead of cheering, we should be very afraid.

I've said before and firmly believe that the peaks in the stock indices are strictly due to the funny money that the Fed is creating out of thin air.  Up to 90% of the deficit is being funded by creating money with no value behind it.  The stock market isn't creating wealth, it's taking $10 bills and writing another number on them.  Hideous inflation is coming.  When corrected for inflation, the Dow been losing value since its inflation-adjusted peak in Y2K.  The Fed gladly takes credit for driving those prices up as more dollars chase a relatively fixed number of stocks, but won't accept any blame for food prices going up, as more dollars chase a relatively fixed amount of food.  The same artificial pricing game is being directed at housing prices right now.

Tough times are coming.  I wish I could tell you exactly when.  But they are coming.