Money was tight last year for the school-bus driver and neighborhood constable in Jasper, Alabama, a beaten-down town of 14,000 people. One car had already been repossessed. Medical bills were piling up. 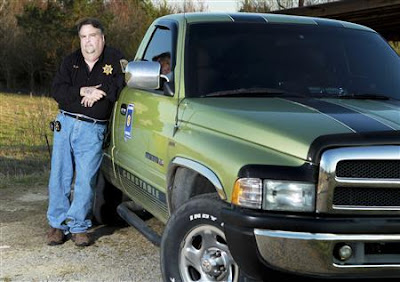 And still, though Nelson's credit history was an unhappy one, local car dealer Maloy Chrysler Dodge Jeep had no problem arranging a $10,294 loan from Wall Street-backed subprime lender Exeter Finance Corp so Nelson and his wife could buy a charcoal gray 2007 Suzuki Grand Vitara.

To fulfill most of the required $1000 down payment required on the loan, Mr. Nelson put up a  Mossberg shotgun.  They also got hit with a 21.95% APR loan.  Fairly predictably, the loan failed.  Mr Nelson and his wife divorces, he has declared bankruptcy.  She has the truck and payment book and is on the verge of declaring bankruptcy as well.

Subprime loans: what could possibly go wrong?  Besides everything.

Until this appeared a couple of days ago, I hadn't heard of subprime car loans.  I'm not going to tell you that nobody should ever get a car loan and only buy cars for cash - although you'd be much better off financially if you could.  I'm paying off a car loan right now.  In January of '12, I bought a nice '09 Explorer with a 3 year loan.  I also daresay my finances are in much better shape than the Nelsons, and that's the point  If your finances aren't in good enough shape to buy a five year old used truck, maybe you need to buy a 10 year old used truck.

This is all part and parcel of the Fed's Quantitative Easing program ("To Infinity and Beyond!").  The fed is financing virtually the entire US deficit with money from nothing.  That money has to go somewhere.


The Fed's program, while aimed at bolstering the U.S. housing and labor markets, has also steered billions of dollars into riskier, more speculative corners of the economy. That's because, with low interest rates pinching yields on their traditional investments, insurance companies, hedge funds and other institutional investors hunger for riskier, higher-yielding securities - bonds backed by subprime auto loans, for instance.

This is exactly what led to the '08 collapse, and is building to the next crisis.   What's that?  The '08 crisis wasn't cars, it was subprime housing loans?  Those are back, too.  The problem wasn't the loans themselves, it was the banks selling the securities based on subprime loans as low risk and then the Feds bailing out those banks.  If someone wants to take this risk, fine.  Just don't back them up with taxpayer money.

You know, houses of cards don't fall down one card at a time, very slowly.  It's pretty much all at once.