Lots of people have opined on last week's events in Boston, with the marathon on Monday to Friday's capture of the 19 year-old second suspect.  I suppose the wimpiness of 21st century America requires I talk about how awful the four deaths and multiple legs and feet blown off is, just like we can't say that these new gun control laws would not have prevented Sandy Hook without saying we don't want to blow up children.  Of course it's awful - that should go without saying.    Here are some of my conclusions: 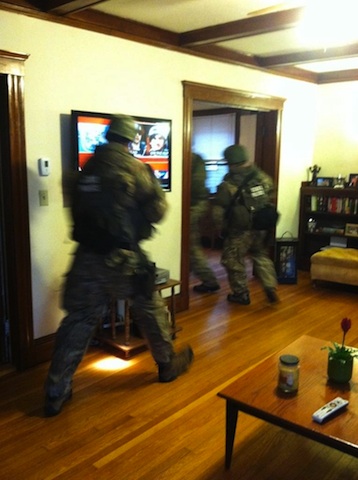 (All that constitution tramplin' and nothing to show for it.  How embarrassing.)

All of this leads me to conclude that the City's finest hour was at the bombing, when first responder paramedics and citizens minimized the loss of lives by administering first aid. That leads to some more conclusions:
A witness to the late night shootout between the brothers Tsarnaev posted pictures he took from across the street and upstairs.  After the shootout, he found this scene in his apartment, across the street and on the second floor.   Most of my readers have enough training to know the axiom (I've heard it attributed to Heidi Smith, Clint's wife) "every bullet that goes down range has a lawyer attached".  The City has an awful lot of damages to pay for - thank God it didn't include innocents being killed by police fire. 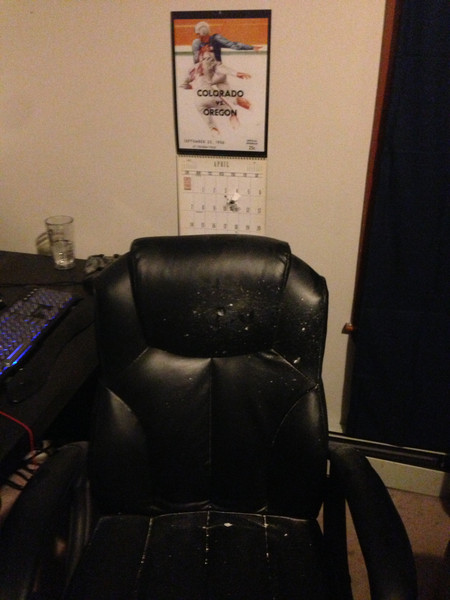 Note the bullet hole through the chair and through the calendar on the wall.  It has been reported the police shot 200 rounds during that late night shooting, and reports are that one police sergeant charged the older brother, Tamerlan, because that officer was out of ammo (and had the chance to charge him).  And these are trained professionals.

You Are Your Own Best Defense And The Only Person You Can Really Count On Being There If There's Trouble.   During the lockdown, what do you think happened to other crime in Boston?  Do you think other criminals suddenly decided to go help out at the orphanage, or did they take advantage of every cop in the city being in Watertown?  What would you have done if one of the brothers had come into your house?  Wait for the police?  This woman "evolved" on the issue in a hurry (H/T Sense of Events)


I realized right then that if I were holed up in my house while a cold-blooded terrorist roamed my neighborhood, I wouldn’t want to be a sitting duck with only a deadbolt lock between me and an armed intruder. There are not enough police and they cannot come to my rescue quickly enough. They carry guns to protect themselves, not me.

Finally, I Just Don't Get Terrorism.  Yeah, I know the purpose of terrorism is to terrify, but it still doesn't make sense no matter how I think about it.  I have no idea what motivated these two douchebags to blow up perfectly innocent people, but I don't understand why any douchebag blows up anybody. Attacks on innocent people make absolutely no sense at all to me.

Posted by SiGraybeard at 5:58 PM