Was Benghazi All About Gun Running?

Like many people, I've been suspicious about the attack on the US Embassy/CIA station in Benghazi, Libya since last September when it all went down.  There are too many things about this operation that just don't smell right.

Six weeks after the incident, I wrote this:


Several of us, this blog included, were very concerned about Libya from the start (not to mention here).  It really appears that the US armed Al Qaeda militants in the Libyan war and Stevens was the go-between.  The trail appears to lead to those guns going from Benghazi to Syria, by way of Turkey - hence the meeting with the Turkish diplomat about an hour before the attack on Stevens began. It appears that Ambassador Stevens, Sean Smith, and his guards, former Seals (/CIA operatives) Tyrone Woods and Glen Doherty were hung out as collateral damage.  Exactly why they were allowed to be killed is not known yet.  It could be they were left to die because the truth that we were arming Al Qaeda would interfere with the presidential campaign.  Or they could have been left to die as part of the campaign.  Wouldn't bombing Benghazi to avenge their killings make the president look more powerful?   Wag the Dog, anyone?

Today, a "real journalist", Katie Kieffer on Townhall.com writes a more detailed summary in  "BENGHAZIGATE: Obama's Secret Gun Running Program".   It appears the early theories were correct: our ambassador and the three other guys were hung out to die to cover a gun running program to Islamic militants.  Bluntly, to keep from embarrassing the president in the last months of his campaign.


We now know that President Obama, former Secretary of State Hillary Clinton and then-CIA Director David Petraeus were likely behind a mishandled gun-trafficking program that ended up arming the radical jihadist rebels who stormed the U.S. consulate and CIA annex in Benghazi, Libya on that fateful day.

Our CIA is still playing the role of vetting which Syrian rebel groups will obtain arms including machine guns, ammunition, and rocket-propelled grenades. While Qatar, Saudi Arabia and Turkey are directly purchasing the weaponry, the Obama administration is aiding the Arab governments in shopping for these arms and transferring them from Libya, to Turkey, and finally into Syria.

It's my belief that Petraeus was put in charge at the CIA as damaged goods, someone they put in charge just in case they needed a fall guy.  He was in the midst of an affair with Paula Broadwell, and it seems it must have been known to others in the internal monitoring groups.  Returning to Katie's narrative:

Last summer, Clinton first proposed a plan to then-CIA Director David Petraeus to partner on a gun-trafficking program to arm the Syrian resistance and “vet the rebel groups, and train fighters who would be supplied with weapons,” according to The New York Times.
...
September 11, 2012: Stevens has an unusual meeting with Turkish diplomat Consul General Ali Sait Akin. Fox News reported that the meeting was “…to negotiate a weapons transfer, an effort to get SA-7 missiles out of the hands of Libya-based extremists.”

Although Katie doesn't get into it, I've read it was quite unusual for the Turkish Consul General to be meeting with the American ambassador hundreds of miles from the American Embassy in Tripoli.  It's my belief that this meeting triggered the attack when Ambassador Stevens tried to get control of the SA-7 missiles - the MANPADS  (Man Portable Air Defense Systems); an estimated 20,000 of these missiles are missing since the fall of the Qaddafi government.  These are the anti-aircraft missiles the US has been afraid of getting into Al Qaeda's hands.  The meeting ended an hour or so before the attack, enough time for the Consul General to get away, but enough time for the request or orders for the attack to make their way to Turkey, up and down the chain of command to the armed militants in the street.

It's looking more and more like Ambassador Stevens, technician Sean Smith, and former SEALs Tyrone Woods and Glen Doherty were all killed due to US gun running to Libyan Islamist jihadis who ran the guns to Turkey and then to Syria.

Call it Fast and Furious: Muslim Brotherhood edition.  Maybe this is why Hillary famously hollered, "what difference does it make now??".  It might make a difference to her 2016 presidential aspirations.  It certainly made a lot of difference to those four men. 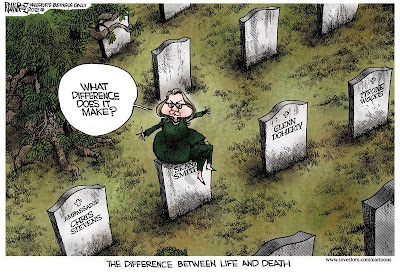