The important point is that the new mantra is for background checks as if that's going to solve things.  It's not.  Lott quoted a 2004 NAS study showing no reduction in violent crime from background checks, and several other worthwhile facts.

I know this is old news to many of you, but on the chance new readers haven't seen it, the web site Gun Facts (now up to version 6.2) is an indispensable source of referenced facts to common anti-gun myths.  According to their pdf, the Brady Bill (which mandated background checks) has been a rather total failure.  The percentage of guns used in homicides stayed the same, the percentage of inmates at both the state and federal levels caught with firearms went up, the Feds have apparently never gone after people who fail the background checks in any number, and federal prosecutions of gun-related crimes has been apparently continually declining.

Likewise, the attempts to enforce more background checks and close some mythical "gun show loophole" is going to fail.  Criminals don't buy guns at gun shows - in 2002, 0.7% did (Bureau of Justice). They steal them or buy them from someone else who stole them.

But just as I virtually pleaded with my Evil Party Senator, Bill Nelson, not to vote for gun control and have had zero effect, no matter what I ask him, I don't think we have a chance of convincing the anti-gun legislators.  What we might be able to do is convince our friends and neighbors that our arguments are right - if they're truly open-minded and care about finding solutions rather than "doing something".

Congress critters are nothing if not self-serving, self-glorifying pigs, right?  As it stands now, until they declare unrestricted dictatorship they need to get re-elected.  They watch the professional pollsters and count votes closer than a pair of four-year olds watch to see one got the bigger cookie.  They watching tracking polls and every indicator they can to make sure they don't make the voters take away their sweet, sweet gig.  The more people we can sway to our side the better - and that especially includes the gun owners who go along with this flawed idea.

I may be wrong, but I'm close to the idea that the "Gun Culture 1.0" folks, the folks who grew up hunting and around guns - the guys sometimes called "Fudds" - are more apolitical and more friendly to this idea.  These are the folks whom we need to convince of the stupidity of more laws.  Gun culture 2.0, the people who are streaming into gun ownership through concealed carry, seem more on our side already,  based on my small, highly unscientific sample. So try to convince those people, too.   While you're at it, if you know guys who are bow hunters and don't care because they think crossbows are not going to be regulated, work on them, too.

Background checks sound like a good idea - but laws rarely if ever work out the way they intend them to with no unintended consequences.  It's the same problem as with gun control in general: they're trying to invent laws that stop people who aren't following laws.  They can't affect those people with laws.  All they can ever do is make life harder for the people who do obey laws. 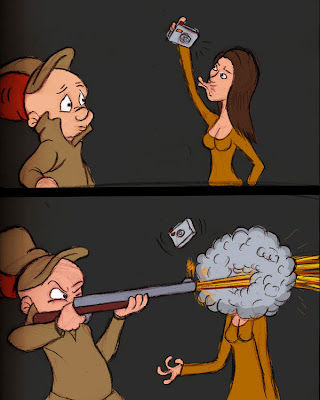 The original Fudd and Duck Face.  My most popular (stolen) cartoon ever.