Just wanted to update you on some of our little projects going on here.  Back in March, I posted about the movable little planters we picked up.  This is what they look like four weeks later to the day: 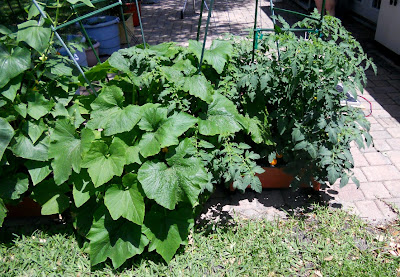 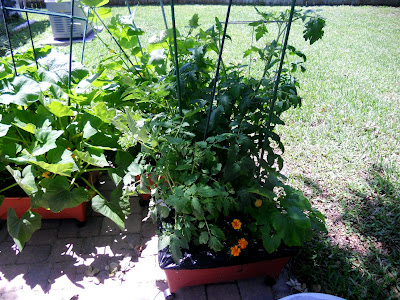 There's tomatoes, zucchini, squash, cucumbers, jalapenos, another hot pepper, a watermelon and a strawberry plant (one so far).  The lettuce is in smaller pots closer to and behind the camera, along with more peppers and other herbs, too. Several tomatoes have already fruited and are ripening, the zucchini has set its enormous flowers, and cucumbers are ripening.  So far, so good.

The sun oven is at the opposite end of the back porch, cooking some eggs.

Every now and then, I use this little piece of "resilience", too: 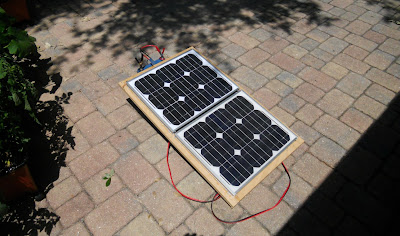 That's my 40W solar charger based on the Small Solar Project page (that solar project still gets a couple of Spam comments a week, to this day).  Visible at the top is the 35A-Hr. AGM battery I use with it.  As you can see, I never built that fancy cart, but it's usable by pulling it out into the sun and keeping an eye on the charge controller on the back.  The charge controller is very similar to one of these - no connection with the seller (I don't even remember where I got it, except for being pretty sure it was on Flea Bay).  The panels together deliver about 3.5A and the controller is rated for 10, so that's a healthy safety margin.