A couple of days ago, I noted the decoupling of precious metal spot prices and what you could buy actual silver coins for.  I've since noticed other commentators writing on it, too, including some financial guys at survivalblog.

Tyler Durden over at Zero Hedge writes on the decoupling of gold and stocks.  He presents this plot showing the situation.  Major decoupling at the red ovals (top) correspond to the negative areas in the plot (in dark pink). The last time this correlation broke badly was in advance of the 2008 market collapse.  Is this just a phenomenon or a precursor?

It's interesting that the US Mint set its all time record in one day gold sales, 63,500 ounces, on the day gold tanked, April 17th, bringing the total sales for the month to a whopping 147,000 ounces or more than the previous two months combined with just half of the month gone. (Gee, people buy more of something they want when the price goes down?  Who would have thought?) 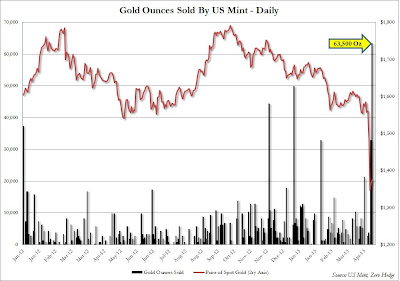 You know how folks wonder if there's much gold in Ft. Knox?  What if they run out?