The city of Phoenix, Arizona, a relatively sane state, needs lifeguards for its public pools.  But it has decided the most important characteristic of these lifeguards shouldn't be that they are good at, you know, actually guarding the lives of people in the water.  Judicial Watch tells us Phoenix  has decided it wants these lifeguards to be racially and ethnically diverse, even if they can't swim.


To diversify the lifeguard force, Phoenix will spend thousands of dollars to recruit minorities even if they’re not strong swimmers, according to an official quoted in a news report. Blacks, Latinos and Asians who may not necessarily qualify can still get hired, says the city official who adds that “we will work with you in your swimming abilities.”

Okay, maybe it wasn't fair of me to assume "not strong swimmers" was the same as "can't swim", but given how people in the process of drowning are known to try to overpower their rescuers and switch roles with them, "not strong" and "can't" are pretty similar.


How did it ever come to this? Competitive swimming is a sport dominated by whites. In fact, studies have found that blacks and Hispanics have lower swimming proficiency compared to whites. In Phoenix public pool lifeguards have traditionally come from “more affluent parts of town” where schools have swim teams. That means virtually no minorities, so the city launched this special program to recruit some.

The logical conclusion of this is that the racial/ethnic background of the lifeguards is more important than what, in a functioning world, anyone would consider the most important characteristic: that they be able to save someone who is in trouble in the pools.  That they be the strongest swimmers possible.  Judicial Watch continues:


Though this is a local effort in one city, it’s also part of a national trend to boost the minority workforce at whatever cost. Under President Obama we have seen a lot of this at the federal level through a variety of specially-designed government programs that give ethnic minorities special treatment at all federal agencies as well as medical and agricultural fields, among others.

Earlier this year the administration made history by hiring the government’s first “Chief Officer for Scientific Workforce Diversity” to mastermind a multi-million-dollar effort that boosts the number of minorities in biomedical research and slashes discrimination in the federal grant process.

The real shame here is that this makes all of us distrust these people: the lifeguards and the scientists who are hired because of these diversity prpgrams.  That means the people who are really qualified and would have been in those jobs anyway will be penalized because of the "equal opportunity cowboy".

My prediction: a few people will die this summer in the Phoenix pools.  Families will sue the cities for not hiring the most qualified candidates.  It won't end well. 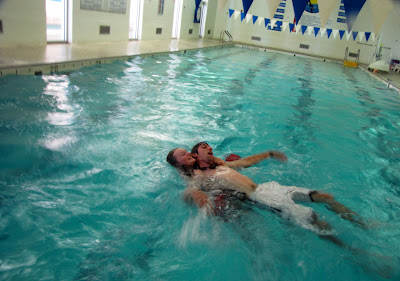 Coming next: once the the doctor shortages caused by Obamacare reach fullness, doctors will be recruited the same way.

Labels: big freakin' out of control government, what?