The Confiscation Begins in Cyprus

The Telegraph reported Sunday that the Cyprus confiscation, excuse me, "bail in" has begun (H/T to WRSA):


Bank of Cyprus said it had converted 37.5pc of deposits exceeding €100,000 into "class A" shares, with an additional 22.5pc held as a buffer for possible conversion in the future.

Another 30pc would be temporarily frozen and held as deposits, the bank said.

How much would you love the idea of having 37.5% of your deposits confiscated?  Wanna bet it can happen here?  Actually, it doesn't have to happen directly here.  As long as the Fed keeps creating money, the value of our dollars will drop and you'll lose the value of your deposits.  As WRSA points out, the bank of Serta will not walk off with your cash, but cash in the mattress is going to be worth less as the inflation works its way into everything.

And it's going to happen.  Pimco president Mohammed El Arian points out the fed's going to have to stop buying bonds at the prodigious rate they're buying.  He essentially says they're going to stop for one of two reasons: they're successful or they fail.  It's unavoidable.


"Right now we are seeing distortions in markets," said El-Erian. "Resources are being misallocated. There are already concerns about bubbles. That's what gets broken in this journey."


In case you haven't noticed, Gold and Silver have both broken out of their downfall and are now working their way back up.  Here's Silver for example, dated 4/25 (last Thurday): 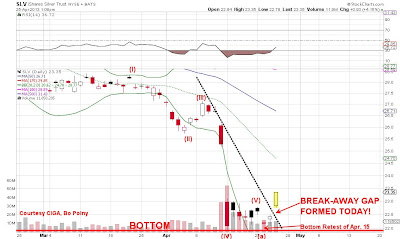 (source is Jim Sinclair's Mineset; linking only gets you to the page it's currently on)

And about that May 1st "Everyone Buy Silver" day thing  (if you haven't heard, watch this 6:34 video)...  I think that the chances of it really affecting the worldwide monetary system are small, but there's a bit more chance it could break some of the price manipulation going on in the metals.  The decoupling we were talking about is real; silver dealers are still getting 25 to 30% more for coins in hand than the spot price.  The head of the CME puts out a video saying people don't want paper, they want physical gold (which is a pretty shocking admission itself).  The question is whether a group of small buyers can affect the price of silver when the market is measured in millions of ounces.