The cylinder of my flame eater engine, that is.

The last thing I mentioned in that post was planning to make a set of thinner, taller jaws for the vise because the existing set was grabbing it below the centerline by a little over a quarter inch.  That creates a force to push it vertically out of the vise - or cuts a notch into the fins.  The SHCS that came in the vise were too tall to use on anything much thinner than the factory jaws, so I found some low profile button cap screws to order.  I figured I could thin the jaws by about an eighth inch on both sides, giving me a quarter inch more opening.  Oh, yeah, I ended up leaving the soft jaws 1-1/2" tall. I might lower that a little.   While waiting for the screws to arrive, I made the jaws out of some quarter inch thick plate I had.  They fit perfectly. 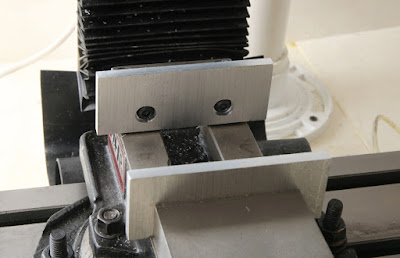 So now it was time for a test fit. 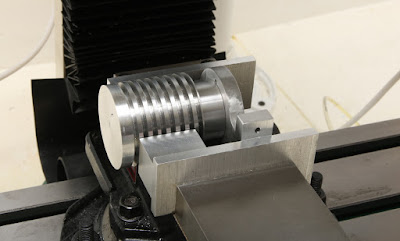 Seemed like it was all good. The gap between the bottom of the cylinder and the vise jaw figured to be 1" and I had a left over block of 1" bar stock.  (Look on the left between the closest jaw and the cylinder).  It felt very secure. It took me a while to figure out how deep to cut the fins and the 1-1/2" diameter part of the cylinder over on the right end because it's never really specified on the print. The print does show that the flat should be 1" wide, so a little geometry (and an online calculator) showed me I ought to cut it  0.190 - about 3/16" deep.  (Seriously - how deep do you cut that?  I think this is similar to what's called Geometric Dimensioning and Tolerancing, or GD&T. ) 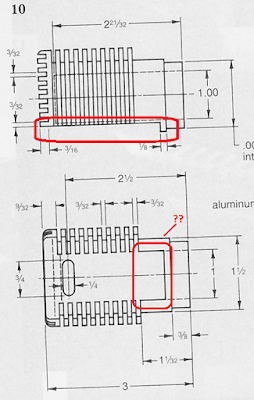 A friend convinced me to put an extra clamp across the top - I guess he was afraid of aluminum jaws replacing 3/8" steel - so I added that. I cut the flat over the base of the cylinder in a few cuts, .025 deep at at time (3/8 end mill) and it went very well. Which led me to decide to take off the 3/32 wide fins in a couple of passes. First pass at 0.100 depth followed by a second pass at 0.190. When I was done cutting off all the fins I thought I'd move the end mill toward the base as a spring cut (a second cut with the same settings; it removes some metal that gets compressed by the cutting forces in the original cut and "springs back" to a higher level), just to level out any cutting marks. Instead it dug in and ripped the cylinder open. Look at the shelf on the end where I stopped the cut. That's a deep cut at the far end. 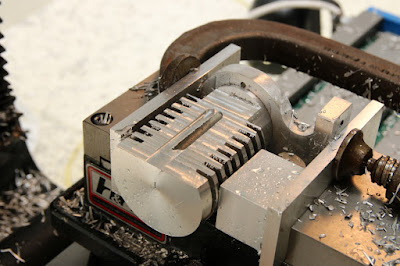 You can see how bad it is. The Z axis on the mill never went below -0.190", so as I moved right to left along the cylinder cutting the fins off, the cylinder must have pivoted and lifted the left end. I sure couldn't see it happen. You can measure the diameter to the flat by putting the calipers on the fin and the flat at both ends. The end closest to the camera is 1/16" smaller than the end by the pedestal. The flat spot on the right end of cylinder after the fins was supposed to measure 1.000 and measures exactly that. Like I say, the entire piece was cut with the EM never going deeper than -.190".

In the aftermath of trying to figure out what went wrong, I focused on the idea that the cutter was getting lower as I made the cuts, which were right to left in the pictures here.  To cut off the fins (3/32 or .094 wide) I raised the Z-axis of the mill from -.190 to -.100, moved to the next fin, made a cut, lowered the cutter back to -.190 and took another pass.  As a diagnostic, I set an indicator on the spindle, raised and lowered the cutter back and forth between -0.100 and -0.200 about 40 times.  The indicator never showed a change in position, which means the cutter wasn't getting lower every time I raised and lowered the mill's headstock.

My guess is that the cylinder pivoted because even with the taller jaws and the 1" bar stock spacer, the contact area holding it is still pretty small.  Theoretically, the contact is only a line with one point on each fin; practically, the metal will spread out a little, but it's still a tiny contact area.  Since the cut is deeper on the left, that means it was rising into the cutter, pivoting around the right end.  There wasn't enough holding force to keep the cylinder from rotating. Maybe I should have made really light cuts? Maybe something between the jaws and the cylinder to keep it from sliding, like very light sandpaper or cardboard?

This was Friday and I've begun work on the replacement cylinder.  I don't see any way I could fix this one.  Maybe with welding equipment and an expert's touch, neither of which I have, but I do have more pieces of 2-3/8" diameter bar stock cutoffs that I can make into the new cylinder.

I'll be the first to admit that my main problem in doing machine shop work is that I Know Nothing.  Well, not quite nothing, but I'm totally self-taught and when you're self-taught there are always holes in your knowledge.  If anyone sees this and has ideas on how not to make this screwup again, let me know!