Vanishingly rare.  I don't know if this is the first time it has ever been discussed, but according to the phys.org website, a collaboration between two universities is researching a booster that literally consumes itself on the ascent to orbit.


In a paper published in the Journal of Spacecraft and Rockets, engineers from the University of Glasgow and Oles Honchar Dnipro National University in Ukraine discuss how they have built, fired, and for the first time throttled up and down an 'autophage' engine which could change how small satellites are sent into space.

'Autophage' translates as 'self-eating', and the concept is that instead of fuel tanks and the superstructure that the booster provides, a vehicle powered by an autophage engine would consume its own structure during ascent.

A typical booster, like the Falcon 9 boosters that SpaceX recovers and reuses, contains liquid fuel and oxidizer tanks along with plumbing to connect those tanks to the booster's nine engines   Big boosters tend to be liquid fueled, with notable exceptions for the large solid rocket boosters used in the Space Shuttle program, and large vehicles like the Delta IV Heavy.  Typically, the booster's weight is several times the weight that can be delivered to orbit.  For every pound of weight added to payload, the vehicle has to carry more fuel, and the fuel to lift that fuel. If the booster's weight was usable fuel that would be an incredible advance.

The autophage engine concept allows weight from the plumbing tanks and other essentials to go into larger cargo capacity.  If the same technology were to be in upper stages, less debris would survive to make it into space.  No boosters (or less junk) to recover or dump in the ocean; and less debris from upper stages.  More efficient from all perspectives.


The autophage engine consumes a propellant rod which has solid fuel on the outside and oxidiser on the inside. The solid fuel is a strong plastic, such as polyethylene, so the rod is effectively a pipe full of powdered oxidiser. By driving the rod into a hot engine, the fuel and oxidiser can be vaporised into gases that flow into the combustion chamber. This produces thrust, as well as the heat required to vaporise the next section of propellant.

Simply by varying the speed at which the rod is driven into the engine, the researchers have shown that the engine can be throttled – a rare capability in a solid motor. Currently, the team have sustained rocket operations for 60 seconds at a time in their lab tests.

I'm having a difficult time visualizing how this could work.  The vehicle has a "combustion chamber", or chambers, so some structure needs to last the entire time it's burning to hold the combustion chamber and engine nozzle(s) in place.  If some control or telemetry to the ground is involved, that will have to be in the booster just as it is now, and will get thrown away, too.  If the autophage motor is just burning along the length of the body, it's not that different from any solid rocket motor; those tend to burn from the center outward along the entire length of the body.  Having the ability to throttle the engine up and back is unusual.  Solid motors are typically said to burn until they burn out.

The researchers describe it in starkly different terms than I do and don't address my thoughts at all.  Dr. Patrick Harkness, senior lecturer at the University of Glasgow's School of Engineering, puts it this way:


"The propellant rod itself would make up the body of the rocket, and as the vehicle climbed the engine would work its way up, consuming the body from base to tip.

"That would mean that the rocket structure would actually be consumed as fuel, so we wouldn't face the same problems of excessive structural mass. We could size the launch vehicles to match our small satellites, and offer more rapid and more targeted access to space." 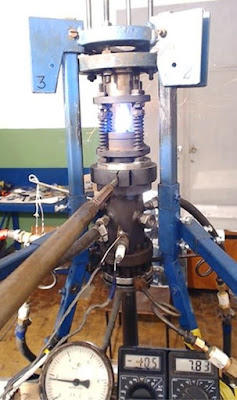