Inside the Worst Maritime Disaster in Decades

Any recreational boaters here?  Anyone who has been out of sight of land, where you know that if things go squirrely you don't go home?  Known that the bottom was a mile or more below you and that was closest land you could get to?  Without your boat you're in a world of trouble.  If you're waiting for a search and rescue aircraft, you're a tiny target in a big ocean.

I've always thought that the giant cargo container freighters, giant oil tankers, and other vessels in the size class near that of an aircraft carrier are capable of surviving anything the sea could hand out.  All of these are monstrous compared to sizes of boats I've been out on.  I've heard of guys on small sailboats surviving hurricanes.  Boats that people who work for a living and decide to get away for a few years, or retire onto, buy.  If a 40 or 50 foot, single-mast sailboat can take on a hurricane, why not a 790 foot long cargo ship capable of carrying 15,000 tons?

Last month, Vanity Fair (of all places) ran an article on the wreck and sinking of the cargo ship "El Faro", a cargo ship that sailed right into the path of Hurricane Joaquin in 2015.  I remembered this because it was early October, and storms in that general area are always worth keeping an eye on.  I heard about this ship that had sailed and was heading for trouble, but assumed that with a professional captain on a ship that size, they shouldn't be at terrible risk.  So they get inconvenienced by changing course to stay in a lee or "heave-to", slow down, and point the bow into the wind, so what?  They should make it to their destination.

The article is long, but worth reading.  I don't think I'm giving away a major spoiler that the problem was a convergence of the storm intensifying more than expected, and the captain not willing to give it the respect it deserved, worrying too much about making his schedule.  Compounded with bad and conflicting information about the storm, because the forecasts were made by people.  Despite the elegant computer models and supercomputers to run them, no two models agree exactly: an experienced forecaster is still the best judge.  As the old saying goes, experience is gained by making mistakes and, most importantly, learning from them.


It is unlikely that Davidson ever fully understood that he had sailed into the eye wall of Joaquin, but he must have realized by now that he had come much too close. As is usually the case, the catastrophe was unfolding because of a combination of factors that had aligned, which included: Davidson’s caution with the home office; his decision to take a straight-line course; the subtle pressures to stick to the schedule; the systematic failure of the forecasts; the persuasiveness of the B.V.S. graphics; the lack of a functioning anemometer; the failure by some to challenge Davidson’s thinking more vigorously; the initial attribution of the ship’s list entirely to the winds; and finally a certain mental inertia that had overcome all of them. This is the stuff of tragedy that can never be completely explained.

Davidson is Captain Michael Davidson; experienced, 53, and known as a stickler for safety.  He left behind a wife and two college-age daughters. Neither his remains nor those of his shipmates were ever recovered.  As best as can be reconstructed, El Faro went down around 7:40 AM on the morning of October 1st.  Search operations were actually started by Hurricane Hunters later that day, but not beginning in earnest until the next day due to the hurricane.  No survivors were ever found.  The ship was eventually found in 15,000 feet of water, and recovery operations attempting to find the onboard voice recorder lasted until April of 2016.  Coast Guard investigators placed virtually all of the blame on captain Michael Davidson. 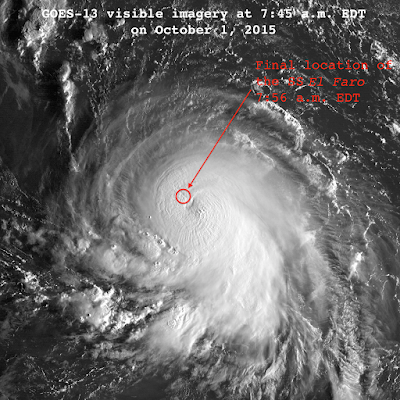