A Momentary Pause for the Rock Music Fans in the Audience

Gibson, the maker of many iconic guitars in rock music, announced they have filed for Chapter 11 Bankruptcy reorganization today.


The Chapter 11 filing on Tuesday in Delaware keeps Gibson in business but gives ownership to noteholders, replacing stockholders that include Chief Executive Officer Henry Juszkiewicz, the company’s leader for more than three decades. According to court filings, current noteholders include Silver Point Capital, Melody Capital Partners and funds affiliated with KKR Credit Advisors.

The restructuring will allow the instrument business to "unburden" itself of a consumer-electronics unit that Gibson blamed for its financial woes. Gibson owes as much as $500 million, and lenders will provide a new loan of up to $135 million to keep the company in business, according to court papers.

The main reason for the reorganization (IMO, of course) is that Gibson took advantage of free money during the last decade and expanded into that "consumer-electronics unit".  To use the business jargon, they went well beyond their core competency, made some bad decisions, and overextended themselves.  There's no secret here; people have been talking about Gibson's problems with looming debt in several online forums (like one I belong to); debt that had to be paid back any day now.  One of those dates when notes came due was yesterday, and Gibson pulled the ripcord.


Gibson, founded in 1894, sells over 170,000 guitars annually in 80 countries. Its guitars are U.S.-made, with factories in Nashville and Memphis, Tennessee, and Bozeman, Montana. It also sells studio monitors, headphones, turntables and other musical instruments. Units also include the company’s Baldwin Piano business. All told, the music instruments business employs at least 875 people, according to court papers.

In addition to the Baldwin Piano business, Gibson owns Epiphone and their family of brands.

While chapter 11 is going to mean big changes, it's nice to see Gibson intending to emphasize making instruments again.  CEO Henry Juszkiewicz is pretty much out; he has a one year contract to "help with the transition".  Juskiewicz is the guy who led them through the Obama-era attack alleging CITES treaty violations, which appeared to be all about violation of the laws of India as interpreted by the US DOJ!!  Or an entirely politically motivated attack.  He's also the guy who made most of the bad decisions that led to chapter 11.  Henry was at the helm of Gibson from 1986 until now (well, next year), so that's just one episode from his career.

There's a bigger question here, though.  It's being reported that both Gibson and Fender's electric guitar sales are sliding down, year after year.  A year ago, online magazine Quartz published an article saying rock and roll is dead and that, "Nobody wants an electric guitar anymore".


Electric guitar makers are seeing their sales steadily plummet. Leading guitar companies Fender and Gibson are both in debt; Fender was forced to abandon a public offering in 2012, and Gibson’s annual revenue fell from $2.1 billion to $1.7 billion over just the last three years. Guitar Center, the largest chain of its kind, is $1.6 billion in the red.

One can philosophize all they'd like about the facts, but the numbers are undeniable.  Fender has improved its fortunes, primarily via sales of their amplifiers and lately with a subscription-based guitar lesson business called Fender Play, but the trend in guitar sales can't be ignored.


Acoustic models began to outsell electric guitars in 2010, and that trend has only continued with every new soft-crooning Ed Sheeran- and John Mayer-like doppelgänger climbing the music charts. And even then, unplugged guitar music has to compete on the charts with the more synthetic sounds of pop and rap.

I get a weekly Fender email and they are regularly promoting their acoustics.  Gibson has some excellent acoustic guitars as well.

A year after that Quartz article was published, they added a followup email from Fender CEO Andy Mooney:


“Sales of fretted instruments are in great shape and Fender’s electric guitar and amp revenues have been steadily rising for several years,” he said, adding that electric sales are holding steady, acoustic sales are on the rise, and “ukelele sales are exploding.”

I own only one Gibson-branded, made in America guitar, a Les Paul pictured in the right column, a few pictures above the list of books from Library Thing.  I don't have skin in the game, but they're a company with a big history and I hope to see them get back to health. 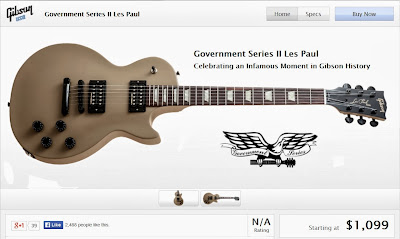 (a "golden oldie" image when Gibson raised the middle finger to the Fed.gov)