Rats and the Law of Unintended Consequences

I've got to say this is a new one on me.  According to a story in USA Today this week, some auto companies have gone to wire insulation based on soy instead of a plastic.  The insulation is derived from a bean instead of petroleum.  The Unintended Consequence is that the soy-based insulation is attractive to rats, and the rodents chew through it, causing (sometimes) thousands of dollars worth of damage.


ROYAL OAK, Mich. — Every evening, Janice Perzigian puts Pine-Sol on the ground around her 2017 Ford Mustang.

Dryer sheets go under the front seat and in the trunk. Spray made with essential oils is applied to the tires, the sides and the back.

Why does she go through this 5-minute routine?

She has a simple answer: to avoid another $600+ repair bill after a rat chewed through wires under the hood of her car, leading to problems last month starting her car.

Turns out Ms. Perzigian isn't alone.  In 2016, a class action lawsuit was filed against Toyota by Los Angeles attorney Brian Kabateck on behalf of Albert Heber of Delphi, Ind., whose 2012 Tundra had its soy-based insulated wiring chewed through by rodents three times, the first time in 2013. The costs of repair totaled about $1,500; damage that Kabateck said Toyota wouldn't cover under warranty.


"Our contention, [while] soy is certainly — it's laudable — they're trying to be more green, at the same time, it's becoming a potential food product for rats," Kabateck said. He believes rats find it "delicious." [Note: anything in square brackets is added by me - SiG]

One thing I had heard of was rats chewing through wires in all sorts of things, and I don't think it's a foregone conclusion that this really has anything to do with the soy based insulation.  Chewing on things is what rats do.


Jim Stevens, a sales representative at Suburban Ford of Ferndale, MI, said finding rats chewing through wires "is a pretty common thing around here," with two or three vehicles coming in a month.

Though he has been aware of the problem for the last five or six years, Stevens said he doesn't buy the theory of the soy-based coating.

"it's just like your home; it's pretty common (rodents) just chew on stuff," he said, noting that he lives in the country and has a pole barn, where rodents have chewed on wires in his tractor.

Tracy Noble, a spokeswoman for AAA Mid-Atlantic, takes the view that there is an increase in these damage incidents, and it probably is because of the soy-based insulation.  She said that in the early 2000s, requirements were put on the automakers to manufacture cars that were more fuel-efficient and environmentally friendly.  In addition to the problems with the soy based insulation, Noble also said there were problems with insulation from natural products such as sisal and flax, and seat cushions made from coconut fiber. 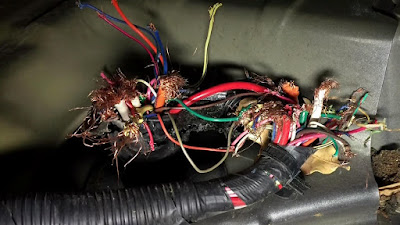 Ultimately, it's probably a worsening of a problem that has always been around to some degree.  The best thing you could do is probably to try to make sure your area is rat free.  Keeping them out of the car is probably easier than getting them out once they live in your firewall or someplace.  Perhaps Janice Perzigian's routine with Pine-Sol, peppermint oil, dryer sheets, and all the rest is a good idea.  Lacking that, there are commercial rat repellents.  You could always try to convince some owls to move in nearby.  Good luck with that.