Revision 2 of the cylinder for my Duclos flame eater engine, to replace the one I destroyed Friday, will most likely be ready to put back on the mill tomorrow.  I expected to get this one in a small fraction of the time spent on the first, since most of the time spent on the first one came from trying to figure out how to do certain things with tools I have (instead of immediately buying more new tools) and it did.  I spent about a week of "4 hour days" working on the first one, and about three of them on the second. 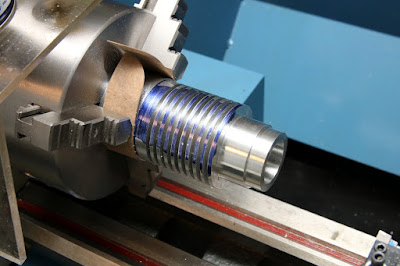 It's not quite done.  The narrow diameter on the right needs to be reduced a little to press fit the pedestal onto this, and it needs to be cut off the extra rough stock that you can see in the lathe chuck on the left (wrapped in thin cardboard).  The same tool that made the fins on the cylinder will be used for that.  Most likely.

The truly detail-obsessed* among you will notice this one is different from the other, which is to say I also learned from my mistakes.  If you count, you'll see this one has nine fins; the other had seven and a smidgen of an eighth.  The print I'm building-to shows the slots and fins both being 3/32 wide (.0938").  On the first one, I just advanced the cutting tool by twice that and expected it to turn out.  I ended up with tolerance buildup - most of the fins and spaces ended up 7/64 wide.  This time, I had the idea to use the blue layout fluid (you can see a little remnant of it in the pic) and layout where edges should be.  Then I marked the edge of a space (between fins) by cutting a couple of thousandths deep; it allowed me to measure how wide the fin would end up and I could move the edge to make sure the fin was really .094 wide.

There are other small differences that I won't get into.  Think of it as a challenge.

I expect to spend more time agonizing over the setup with a dial indicator, verifying that it's the same height everywhere, and maybe putting a foot long pipe on the vise handle to clamp it tighter.  Basically, all the little tricks I've come across will get used, unless they contradict each other or something else.