I've been continuing work on my flame eater engine which I post about regularly.  The next part is machined on both the lathe and the mill, and today I took it out of the lathe to move to the mill for the rest of the operations.   Before that, I grabbed a quick picture. 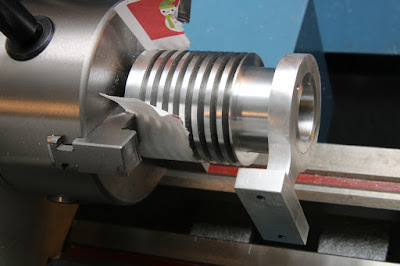 The engine pedestal, the first part I built, pressed onto the base easily.  It can be wiggled off with a bit of effort but I'm not sure that's a concern. I could remove that concern with a drop of red LocTite.   (It was never on the cylinder while the lathe was running)

When I went to put the the the part in the vise on the mill, I found it doesn't really fit.  The vise jaws are too low profile,  and the vise barely opens wide enough.  A quick unplanned side project to make a couple of temporary jaws for the vise is jumping in front of this.  While I'm at it, I'll make these thinner than the current steel jaws (.390 thick).  By changing the mounting screws, I can reduce the jaw thickness s to .250, each, which will pick me up a little over an eighth on both sides, so a total of a quarter inch.  Instead of the current 15/16" height, I'll make them about 1-1/2 inches tall, which will put better pressure on the side of the cylinder, which is 2" in diameter.

I never know exactly how much detail to put into these posts, because I never know what kind of readership there is.  I don't see any sense in telling you about every 1000th of an inch on every cut, but rest assured I need to pay attention to them.
Posted by SiGraybeard at 8:58 PM