From a story at ARS Technica that links to the Journal of Neurosurgery, we learn about something new in biomedicine.  Deep Brain Stimulation (DBS) devices are becoming common treatments for Parkinson's Disease and some other movement disorders.  The Journal reports on a woman whose DBS reset itself after a lightning event.  This is considered "electromagnetic interference" or EMI.

In the world of EMI, there are a couple of principle mechanisms by which and electromagnetic field can get into a device: being conducted into it on wires or being radiated into it by electromagnetic (EM) fields around the device.  This appears to be the second case.


Doctors in Slovenia report that a 66-year-old woman with an existing brain implant experienced a close call with the device after lightning struck her apartment building. The strike ruined the woman’s television and air conditioning unit and managed to switch off her brain implant. Luckily, the woman and her device were not otherwise harmed.

They say the woman's apartment was struck by lightning, although in many such instances thought to be direct strikes, they turn out to be caused by strong EM fields induced by a nearby lightning strike.  Regardless of the exact mechanism, things in her apartment were damaged and her DBS brain implant reset and turned itself off by the strong EM field.  Since her DBSwasn't plugged into its charger, we can be sure the surge wasn't conducted into the DBS over wires, which means it entered by radiation


Luckily, at the time of the thunderstorm, the woman wasn’t charging her pulse generator or charging the recharger system, so none of her equipment was damaged. But the tremor in her neck—which the brain implant was effectively treating—returned about an hour after the storm. When she checked her device, she realized it wasn’t on and went to a clinic, fearing her device had been fried by the jolt.

Doctors there discovered that the implant was simply turned off and not harmed by the electrical blitz. They speculated that a safety system in her device (the Activa RC neurostimulator by Medtronic) kicked in during the storm, sensing the electromagnetic disturbance, and caused it to turn itself off. While this is a good fail-safe for the device, it could be devastating for patients who suddenly have debilitating symptoms return unexpectedly when their implants shut off.

The doctors point out the implications of this; that patients should avoid sources of high EM fields.  They even note a case where a patient with a DBS device to treat Parkinson’s disease suffered “serious, permanent neurological injury” after their DBS electrode heated up during an MRI scan.

Strangely, and this seems hard to believe, it sounds to me as though the medical equipment field isn't as established with respect to lightning and EMI problems as commercial aviation requirements are.  In aviation, there are standard tests and requirements all the equipment has to meet.  Equipment with different usages, for example, inside a pressurized environment vs. exposed to the outside temperature and air pressure; perhaps connected to outside antennas as opposed to equipment only connected to power or other wiring inside the aircraft.

While the Journal of Neurosurgery listed a lot of things to be cautious of, I think they err on the side of over caution:

Microwave communications towers, TV/radio broadcast towers, and even ham stations are set up to be safe to be around (general intro here).  They're much weaker than a lightning strike. I don't know about the exact risks from welding equipment, but the things I do know about produce fields much weaker than lightning does, so they don't concern me. 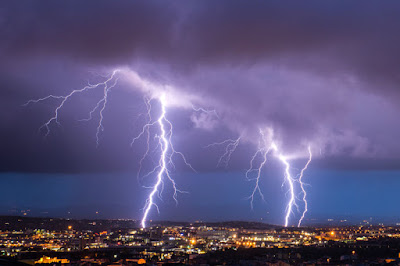