It's not news that the National Shooting Sports Foundation has kicked out Dick's Sporting Goods for hiring gun control lobbyists.

Nor is it particularly New news that Springfield Armory, well, cut off Dick's.  From the email they sent me:


GENESEO, IL, (05/03/18) – Springfield Armory is severing ties with Dick’s Sporting Goods and its subsidiary, Field & Stream, in response to their hiring a group for anti-Second Amendment lobbying.

This latest action follows Dick’s Sporting Goods’ decision to remove and destroy all modern sporting rifles (MSR) from their inventory. In addition, they have denied Second Amendment rights to Americans under the age of 21. We at Springfield Armory believe that all law abiding American citizens of adult age are guaranteed this sacred right under our Constitution.

It is clear where Dick’s Sporting Goods and its subsidiary, Field & Stream, stand on the Second Amendment, and we want to be clear about our message in response. Their position runs counter to what we stand for as a company. At Springfield Armory, we believe in the right and principles fought for and secured by American patriots and our founding forefathers, without question. We will not accept Dick’s Sporting Goods’ continued attempts to deny Second Amendment freedoms to our fellow Americans.

(hey - they're the ones who used the word "severing")

What is news, at least to me, is that it seems no other gun company has cut off Dick's.  After an exhaustive web search (I looked at four whole pages!), the only company I can find is Springfield Armory.  How about it, gentlemen?  Glock, Ruger, Remington, Sig Sauer, Savage, Smith&Wesson, Taurus, and any of the multitude, I'm lookin' at you!  How about we shut down Dick's?  Why do they even have guns and ammo to sell?  (As an aside, I haven't been in a Dick's Sporting Goods store since they made a show about stopping MSR sales after Sandy Hook, so what guns do they sell?)

Two can play at this economic pressure game.  Hornady did a great thing with refusing to sell to New York state or city entities as return pressure for their Governor pressuring financial companies to attack gun companies.  How about the rest of the ammo companies?  How about Glock or whoever sells the New York Police Departments their guns cancels the contracts?  Make them use a "bucket full of rocks" like that Pennsylvania school district. 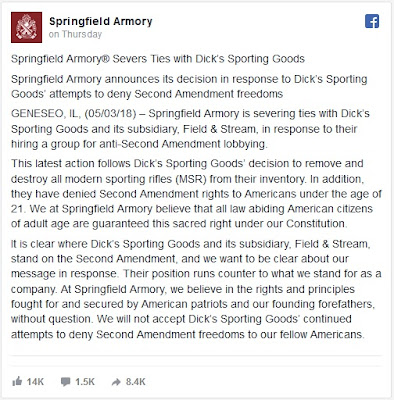