I know that for a lot of the country, Memorial Day is the unofficial start of summer and there will be cookouts and parties at the lake or beach or park.  Allow me join the chorus of folks saying that while you're enjoying your day, be it beach, barbecue, pool or whatever, take a moment to remember and thank those who have given their all in service to us.  Some don't get the chance to have that cookout, or be with their loved ones.

There's a couple of pictures that I regularly run for Memorial Day, and this year I'm going to go with the image from 2011 that touches me by having an element of the unexpected. The images of women who have lost their husbands are gut-wrenching, but a dog isn't generally expected to have feelings this deep.  I went looking for the a photo credit and I found one this time. 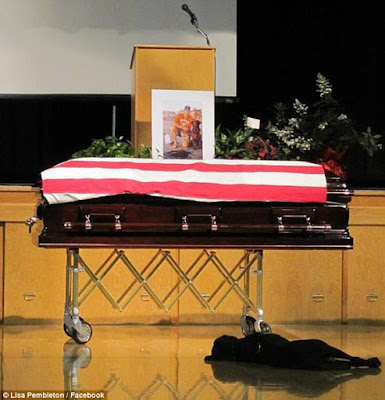 In a final act of loyalty, Hawkeye, the dog of slain Navy SEAL U.S. Navy Petty Officer 1st Class Jon T. Tumilson walked up to his fallen master’s casket during the funeral in Rockford, Iowa, and then laid mournfully down beside the body for the rest of the proceedings  [Note: Petty Officer Tumilson was one of the 30 killed in Afghanistan in the shoot down of Extortion 17 which the families blamed squarely on the Obama administration - SiG]

Far too large a portion of the ruling class could use Hawkeye's loyalty.  There are signs that's improving, no matter if it's temporary or not.  The others could ponder showing less humanity than a dog.


No barbecues for us.  We're still under the clouds associated with that Tropical Storm over in the Gulf.