The Move to Make the Electoral College Irrelevant

Just like all the insane "resistance" movement going on in society, refusal to accept an election if your preferred candidate doesn't win, the move to overthrow the electoral college system is still pushing on.  We kind of talked about this in March, but the Daily Signal updates us on a vote from Connecticut to counter their voters.


Opponents of the Electoral College achieved an important victory last weekend when Connecticut’s legislature passed the so-called National Popular Vote compact. Democratic Gov. Dannel P. Malloy is expected to sign the measure.
...
States that approve this legislation enter a simple compact with one another. Each participating state agrees to allocate its electors to the winner of the national popular vote regardless of how its own citizens voted. The compact goes into effect when states holding 270 electoral votes (enough to win the presidency) have agreed to the plan.

Most of us haven't heard of this "National Pact", by which states potentially counter the will of their voters.  Author Tara Ross points out they're almost two thirds of the way to locking up the necessary 270 electoral votes to win the presidency.


[Counting Connecticut] 11 states and the District of Columbia have now approved the measure, giving the compact a total of 172 electors. It needs only 98 more to reach the 270 mark.

It's inevitable that, at some point, the state will vote for a Democratic candidate (it's Connecticut after all) and a Republican will win the national popular vote.  When that happens they will counter the will of the majority of their voters to change their electors over to the Republican.


What would Founders such as Roger Sherman think? That Connecticut statesman was an influential delegate at the Constitutional Convention of 1787. The Great Compromise—sometimes called the Connecticut Compromise— which gave Congress its bicameral structure, might never have been brokered without him.

Moreover, Sherman was one of many delegates from small states who refused to go along with the idea of a direct popular vote for the presidency. He knew that little Connecticut would be outvoted time and time again.

Recall that Hillary won the popular vote by a little over 2 million votes.  In the 5 counties that encompass NYC, (Bronx, Brooklyn, Manhattan, Richmond and Queens) Clinton received well over 2 million more votes than Trump. (Clinton only won 4 of these counties, Trump won Richmond).  Why would any candidate visit a state like Connecticut?  Why wouldn't the next Democrat candidate just rent an apartment in New York City or El Lay and mostly stay there.  Work harder in those big population centers to reach a few more voters who lean toward you anyway rather than build a diverse coalition.  Or to quote myself from March:


Whether they know it or not (and I assume they do know it), the desire to get rid of the electoral college is a desire to avoid those icky flyover-country people (with their bibles and their guns!) and have candidates just campaign in a few big cities.

One thing we can be sure of.  If this becomes law, and passes the Supreme Court, you can bet that there will never be any effort devoted to the issues affecting people in flyover country.  There will never be another minute wasted (after the primaries, which are state by state) talking about any of the concerns of any state less than the top third of the national population. 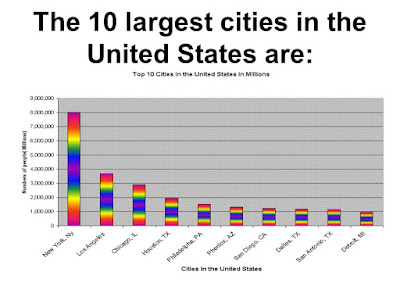 Our country was designed to protect the small states from the big ones, and to protect the minority from the majority.  The bicameral legislature with one house's representation proportional to population and the other equal representation is just one example.  The electoral college with its incentives for presidential candidates to build broad-based coalitions is another.  There is a full-time, well-funded effort to destroy that.