Can You Imagine the Dead Birds?

General Electric has a web page announcing the world's largest wind turbine.  Called Haliade-X, the 12 Megawatt turbine is enormous.  As the blades rotate, it will sweep out 360 meters tall, taller than the Eiffel tower and a bit shorter than the Empire State building 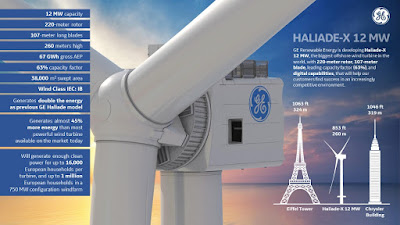 They're rating the Haliade-X to produce 67 Gigawatt*Hrs over the course of a year.  That's 45% more energy than any other offshore wind turbine currently available.  If there's no wind, there's no energy output, so the usefulness of a wind farm with an array of these depends strongly on the specifications for the wind.  You'll note about midway down the left column the legend, "Wind Class IEC:IB" appears.

What's that?  The company that makes the blades for GE is called LM Wind Power, and they post this web site.  IEC is the standards organization and IB translates as wind class I, the highest, and turbulence class B, on a scale of A to C.  Installed offshore, the winds tend to be less turbulent than over ground.  Especially a hundred meters up in the air where the blades are.

Wind class I lists a 50 year gust of 70 m/s, which my calculator converts to 157mph.  That's in the Category V hurricane level, and while I doubt that these will last 50 years (because saltwater) it seems sane to rate it to that.  Note that the category says the average annual wind speed is 10m/s or 22mph.

These are still vaporware, but they're trying to sell them now.  The first Haliade-X turbines will probably be in demo next year.  Production units shipping to wind farms could be as early as 2021.

In case you've been in a cave, a lot of people are upset that wind turbines kill birds.  The numbers of just how many birds are being killed vary with the source and it's hard to know who's right.  It's honestly probably hard to know.  The Institute for Energy Research says:


According to a [2013] study in the Wildlife Society Bulletin, every year 573,000 birds (including 83,000 raptors) and 888,000 bats are killed by wind turbines — 30 percent higher than the federal government estimated in 2009, due mainly to increasing wind power capacity across the nation.  This is likely an underestimate because these estimates were based on 51,630 megawatts of installed wind capacity in the United States in 2012 and wind capacity has grown since then to 65,879 megawatts.

Put another way, it's reported that the BP Deepwater Horizons oil spill killed 800,000 birds.  BP was fined $100 Million, yet only wind power facility has ever been fined for killing birds: Duke Energy was fined $1 Million for killing 163 birds in Wyoming from 2009 to 2013.  Two years at that modest 573,000 bird deaths per year easily exceeds the oil spill tally and wind turbines have been doing that for years, not just a one time disaster.

But no one will ever notice how many birds get killed by an offshore wind turbine.  Especially if there's no way for people to take videos of birds getting killed or photos of dead birds around the base.  Sounds like the wind power industry gets everything they could ask for.