If This Thing Was 20kW, I'd Have to Start Looking for Financing

Machine Design relays a report from NASA and the National Nuclear Security Administration (NNSA) that a small, fission-powered, nuclear power plant has undergone some robust initial testing and is working perfectly.


A small, lightweight fission reactor built at NASA’s Glenn Research Center in Cleveland recently passed extensive testing in the Nevada desert “with flying floors,” putting it one step closer to powering human outposts on the moon or Mars.

In what may be a desired name in search of an acronym (and a nod towards “The Simpsons”), the reactor is called KRUSTY - Kilopower Reactor Using Stirling Technology.  KRUSTY went through testing from November 2017 through March.  NASA report pdf here.


The experiment culminated with a 28-hour, full-power test that simulated a mission, including reactor startup, ramp to full power, steady operation, and shutdown. Throughout the experiment, the team simulated power reduction, failed engines, and failed heat pipes, showing that the system could continue to operate and successfully handle multiple failures.

KRUSTY is said to be able to deliver 10 kW for up to 10 years.  I know I've talked about this before, but while your house may be rated for 30kW (120V with 250 Amp service), you typically don't use a third of that.  The way power is distributed to progressively smaller groups of houses in a neighborhood, the power companies budget around 6kW per house.  The higher voltage going into the neighborhood is dropped to the 120V that goes to your house (in the US, of course) by distribution transformers.  There is usually one of these to every five houses, and it's rated for 25 kW.  They budget 6kW for the average house and you can quickly see that 5 houses makes 30 kW not 25, but they rationalize that by saying it's not likely everyone will be using the full 6 kW at the same time.

That says KRUSTY could power a typical house easily; maybe even two houses.  Cool.  What's inside?  And exactly what do they mean by "Stirling Technology" in the name?


The reactor core is in a solid, cast-uranium-235 core about the size of a roll of paper towels. The prototype power plant uses passive sodium heat pipes instead of cumbersome pipes, pumps, plumbing, and a liquid working fluid used by traditional reactors to carry heat from the reactor.

The heat powers two Sterling heat engines which convert heat energy to mechanical work and mechanical work into electricity.  This means it could power a human outpost, which is ideal for the Moon, where generating power from sunlight is difficult due to the 14-day lunar nights. The  reactor is also fault tolerant, so any loss of cooling leads to an automatic reduction in fission power with no possibility of uncontrolled  reactions.  Ultimately, though, the target is to power more exploration, including Mars. 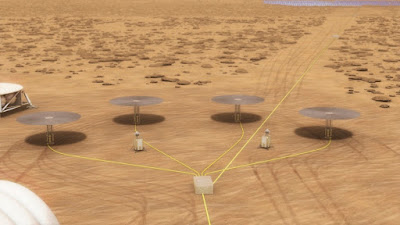 Back in the first year of this blog, 2010, I offered a strange thought.  The US Navy has been powering ships with nuclear reactors for around 50 years.  These reactors have become a standard federal part number.  At least in concept, they could say "we need a new A4W" or "we need a new A1B" and order one from the approved suppliers.  One A4W delivers 104 Megawatts, or more than 10,000 times the power KRUSTY can deliver.  If KRUSTY can power a home, an A4W can power 10,000 homes.  One A1B delivers 700 MW.  You can do the math.

Now maybe this isn't the exact ticket.  Maybe the Navy's reactors require too much human attention and maintenance, and maybe the design is based on having as much cooling water as they could ever want - the entire ocean as a coolant source.  I just still think the answer lies in distributed power systems and fewer centralized, single-point failure scenarios.  I'd love to have a KRUSTY in my backyard.  Yeah, considering it's NASA hardware I don't think there's a chance I could ever afford it.