A Little Followup on Cryptocurrency Mining

For reference, back in January, I ran a piece about whether bitcoin was in a bubble.  As part of that piece, I introduced the concept of Bitcoin mining.


The algorithms were designed to be resistant to computers becoming faster over time, so while someone can "mine" bitcoins by running software, it would be better for them to have a room full of computers than one supercomputer.   It costs energy and time to mine bitcoins.  Newer, faster computers are slowed by the algorithms so that technology doesn't give them an advantage in mining the "harder to mine deposits".

This week, Electronic Design runs an article on cryptocurrency mining and the impact it's having on the world.  There's a couple of pull quotes that are a bit mind-boggling.  The first one is the lesser of the two:


When it comes to mining cryptocurrency and how much power is consumed during mining operations globally, nobody knows for sure. However, based on varied utility costs alone, it’s estimated at 53.99 TWh, or enough energy to power the country of Bangladesh annually, according to the Digiconomist Bitcoin Energy Consumption Index—a website dedicated to providing in-depth analysis regarding cryptocurrencies.

Personally, 53.99 Terawatt-hrs (which I'll call 54) means more to me than the annual power consumption of Bangladesh.  A Terawatt is 1000 gigawatts or 1 trillion watts.  A budgetary number for a house in the US is around 20 kW, and while it varies over time, let's just say it's that much energy all the time. In one year, that's 175 Megawatt-Hours.  That means they're saying that cryptocurrency mining uses the same amount of energy as 308,000 of those houses.  Given the accuracy of that 20 kW estimate, probably over a million of them in real life.  Spread out over the world, that doesn't seem like much.

The other pull quote is the one that's mind blowing.


The online sustainability website Grist purports that if current mining trends continue to climb, the entire cryptocurrency network will use the same amount of power the world consumes annually by 2020.


By July 2019, the bitcoin network will require more electricity than the entire United States currently uses. By February 2020, it will use as much electricity as the entire world does today.

While neither Digiconomist or Grist impresses me as objective - they both reek of climate change alarmism and anti-cryptocurrency bias - if it's remotely true that by February of 2020 the amount of energy used to mine cryptocurrency (Bitcoin is still the biggest example) exceeds all the energy supplied in the world, that just ain't gonna happen.  Mining will stop long before 2020.  Mining will stop long before July of 2019.

We all know, "things that can't go on won't go on".  We all know that extrapolating trends tends to be completely worthless, usually as soon as the trends are pointed out.  What will stop it is the pure cost/benefit ratio.  The cost of the electricity to mine a coin will go up until it exceeds the amount gotten from the coin.  Just as gold miners will park the heavy equipment when the price goes below some level (depending on their cost per ounce), cryptocurrency miners will turn off the computers when it becomes unprofitable.

Right now, I find the price of a Bitcoin to be $9,212.09.  According to that Electronic Design article, (link to a MarketWatch piece) the cost to produce a coin varies from  $3,244 worth of power in Louisiana, to $9,483 in Hawaii.  While I can see someone spending $3,244 to get a coin worth $9,212, nobody is going to keep mining if it costs more than they get back.  According to MarketWatch, cryptocurrency mining in general, and Bitcoin in particular, is profitable in any state except for Hawaii at today's prices. 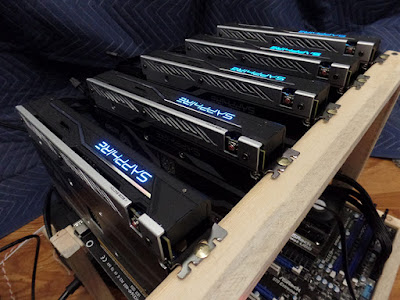