This is a mission that brings back memories of bold missions in the past.  The next Mars rover, to be launched in 2020, will bring an autonomous helicopter; the first mission in history to bring a flying, heavier than air vehicle to another world.


The next iteration of the Mars rover has similar design features to the Curiosity rover currently exploring Mars, however it is more technologically advanced than its predecessor. The new rover will have seven new instruments, redesigned wheels, and be more autonomous. However, the standout feature of the new Mars 2020 rover is the Mars helicopter—the first of its kind. It is small, autonomous, and will help demonstrate the viability and potential of heavier-than-air vehicles on different planets.

The helicopter system took four years to design; it's electric, powered by two motors totaling 220 Watts, and running on Lithium Ion batteries charged by its own solar panels.  It's also not much in the way of performance, according to the Machine Design article, which only says it, “can make short vertical climbs of up to 10 ft and hover for about 30 sec.”  Anyone with battery-operated tools knows well about the trades of battery life vs. size and weight.


The aircraft weighs less than four pounds and its fuselage is the size of a softball. It has twin counter-rotating blades and will rotate at 3,000 revolutions per minute (rpm), about 10 times the rate of a helicopter on Earth. The helicopter contains its own instrumentation to explore Mars, including solar cells to charge is lithium-ion batteries and a heating mechanism to warm it in low-temperature situations. The helicopter will be launched once the rover reaches a suitable location and its batteries are fully charged. The hope is that the helicopter will be lead to future low-flying scouts.


In case you missed this hard physics reality in The Martian, Mars is light minutes away (how many depending on exactly where the two planets are in our orbits).  As Project Manager Mimi Aung said,


"We don't have a pilot and Earth will be several light minutes away, so there is no way to joystick this mission in real time," said Aung. "Instead, we have an autonomous capability that will be able to receive and interpret commands from the ground, and then fly the mission on its own."

All helicopters balance lift created by the rotor vs. total weight, but lift depends on the atmosphere and as was said, Mars doesn't have much of an atmosphere.  In the designer's favor, though, it has less gravity (about 3/8 of our surface gravity).  The response was to focus on removing weight rather than developing larger rotors.  The embedded video shows the little drone lifting off in a pressure chamber, presumably matched to Mars' thin atmosphere.

Mars 2020 is scheduled to launch on a United Launch Alliance (ULA) Atlas V rocket from Space Launch Complex 41 at Cape Canaveral Air Force Station, and is expected to reach Mars in February 2021. 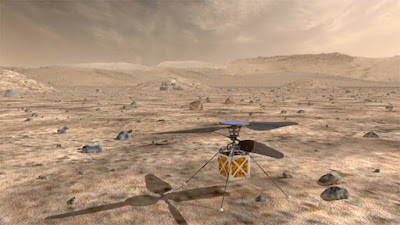