Sometimes the Jokes Just Write Themselves

Machine Design's daily email brings news that Dyson, the company famous for its vacuum cleaners, is going after the electric vehicle market.  They're doing it by way a new technology, which they may be the first to bring to market: solid electrolyte batteries.


This past February, James Dyson made the decision to build more than just high-precision vacuums and fans and instead focus on electric vehicles (EVs). Dyson plans to construct three EVs by 2020, the Financial Times reported, [paywall] with an estimated $2.8 billion project. Much like Elon Musk, Dyson looks to shake up the EV market by using solid-state batteries instead of the lithium-ion versions.

According to the Financial Times, the trio of cars would be non-sports car high-end models which would scale in production aimed toward the mass market. The vehicles will be constructed out of light materials just like the BMW i3 EV carbon fiber body. The key is the solid-state battery which, theoretically speaking, will be able to hold more of a charge compared to lithium-ion batteries.

Although they never directly say what the cathode and anode (negative and positive plates) are in the battery, they claim a solid electrolyte battery will be smaller and higher energy density than existing batteries, as well as being safer and longer lasting.

It might be the reason they don't describe details of the battery is because they don't exist, yet.  At least not outside the lab, in industrial quantities.


Currently, finding the right material for solid-state batteries is key. According to Axios, Samsung and Dyson have collectively invested $65 million in Massachusetts-based Ionic Materials. The firm claim to be making progress into the technology. Its new material, a liquid crystal polymer, may be able to solve many of the current issues of mass production.

Ionic Materials claims that lithium ions move as fast or even faster through their polymer than they would through a conventional liquid electrolyte system. This helps demonstrate the stability of the company’s polymer material. Second, the polymer works at five volts and can be made simply and cheaply. Third, while most materials in solid-state research operate at about 60°C (140°F), the firm’s material works at room temperature.

Axios points out that the right material to use for a solid electrolyte battery is lithium metal.  Pure lithium metal is highly energetic, and would add something like 30% more capacity to today's state-of-the-art electric car batteries.  Lithium just also has the unpleasant characteristic of exploding or catching fire if it comes in contact with moisture.   Ionic Materials claims they've developed a liquid crystal polymer that conducts electrons as well as a liquid but doesn't make the lithium do nasty things.

The article opens by suggesting Dyson looks to shake up the electric vehicle industry by using solid-state batteries in its 2020 car lineup. Since the batteries don't exist and we're half past 2018, I'll say no, they won't.  2021?  Maybe. 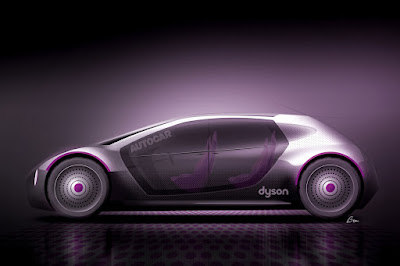 Dyson's EV, the car from the company that makes things that suck.  The Vroom-ba?