Setup the rev 2 cylinder in the vise with a few mods from last time.

First, on a recommendation from Irish, I milled a short, wide "trough" along the length of the soft jaws.  A little experimentation with 3D CAD showed me that a wide, shallow cut was a good approach.  The cut is centered around 1" above the floor of the vise, and if everything works as intended, gives me three lines of contact instead of just one.  The cut width was set by moving the cylinder into the jaw until it started to get too close to the counterbored screw holes (dashed lines, lower right) and then measuring how long the line segment is.  Then I redid the drawing using a standard sized end mill and remeasured the depth. This is a single pass, just about 1/32" deep with a 1/2" diameter end mill; an easy cut.  Here's a view from the end without the pedestal where it's easiest to see, showing how the cylinder gets contacted in three places and not just one in the center.  (Yes the camera's rotated; I'm not trying to look like an annoying commercial, it's hard to get the camera where it can see this).  The vise jaw is the wall with horizontal lines that look like stacked bricks, made by the end mill that cut back the jaw, while the big round thing is part of the end of the cylinder. 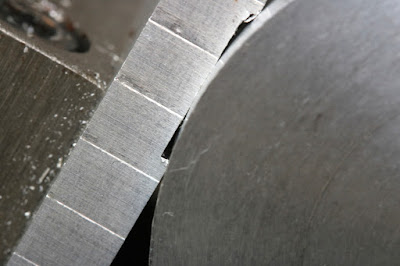 After I added some thin cardboard for extra contact roughness, I put it in the vise, ensured it was level to a dial indicator, and tightened it up.

I'll probably try to cut it in the next day or so.  Once I'm sure I've done everything reasonable to not barf it up again.