DC Has Highest Concentration of Psychopaths in the US

This is my surprised face.

Townhall has the story that researcher Ryan Murphy of Southern Methodist University has researched the prevalence of psychopathic behaviors (the paper - pdf) .


Murphy analyzed "levels of big five personality traits (extroversion, agreeableness, conscientiousness, neuroticism, and openness to experience) in each state," to carry out his research.

There's a hypothesis that says psychopaths are likely to gravitate to positions of power (still my surprised face).  It turns out DC tends to draw psychopaths.


"The District of Columbia is measured to be far more psychopathic than any individual state in the country, a fact that can be readily explained either by its very high population density or by the type of person who may be drawn a literal seat of power (as in Murphy 2016),"

The reference to "Murphy 2016" appears to be Ryan Murphy, the author of this paper, who also said:


"The presence of psychopaths in District of Columbia is consistent with the conjecture found in Murphy [2016] that psychopaths are likely to be effective in the political sphere,"

The Northeast states contained the most psychopaths of any region, with three of the top five coming from that region. The most psychopathic state was Connecticut (here I was a bit surprised), followed by California, then New Jersey and New York.  In what was perhaps the most surprising conclusion, New York tied with Wyoming.  Speculation to explain that tends to be sampling errors due to the smaller population in Wyoming.  (I probably would have guessed CA or NY as #1, followed in third by NJ, but probably wouldn't have guessed CT and certainly not WY.  For whatever that's worth.)

So the most psychopaths are in DC (government), California and New York (entertainment).  Gosh, what else do these places have in common?  Love for each other?  I may be surprised for a whole femtosecond. 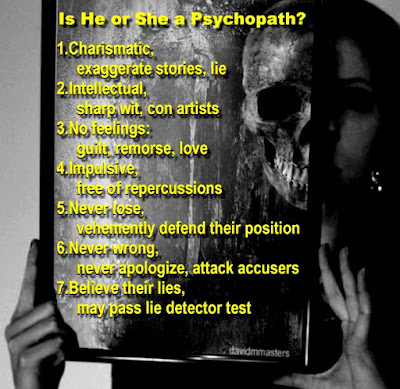 Posted by SiGraybeard at 4:51 PM