The Other Big News From The Supreme Court Today

Of course, the really big news is the retirement of Justice Kennedy, giving President Trump his second chance to put his choice of a justice on the Supreme Court.  Although not a slam dunk, the Republicans do have a slight majority in the Senate which should lead to confirmation for whomever he picks, unless someone who hates Trump, like John McCain, or a liberal Republican like Susan Collins gets in the way.

I want to point out the other news out of the court today that I think is a really big change and could potentially lead to big changes in the way things are done.

In the case of Janus vs. the American Federation of State, County and Municipal Employees (AFSCME), the court ruled in favor of Mr. Janus.  The suit was over his being forced to pay dues to a union that he had no desire to join.  The court essentially ruled that no one should be compelled to fund political speech with which they disagree.  Justice Kagan's dissenting opinion said this was "weaponizing the first amendment" (excerpt here) - which I have a difficult time understanding.  I don't see how strengthening the freedom of people to decide what political causes they support is somehow an expansion of some sort of government or judicial tyranny.

Letting the Townhall piece pick up the meat of the story:


The decision overturns the 1977 Abood v. Detroit Board of Education case that upheld agency fees for a union’s core activities, such as collective bargaining, but also said nonmembers could not be forced to support the union’s direct lobbying and electioneering activities.  In practice, this distinction became blurred.  For example, unions routinely used agency fees to fund their national conventions, which in many cases were overtly political.

Janus, a child support specialist for the Illinois Department of Healthcare and Family Services, argued that when public unions bargain collectively with the government, they are engaging in inherently political activity because it influences countless matters of public policy: taxes, spending, pension liabilities, debt and others.  As a result, the agency fees that unions demand amount to forced political speech and violate the First Amendment.

For long time readers, you'll know that I have a tendency to be rather disapproving of civil employee unions like AFSCME and the SEIU.  Even America's worst president (or one of the top few worst) FDR was against government employee unions.  There's simply no honest negotiation going on.  This isn't a group of stoic but kindly old Bob Cratchits negotiating with grizzled, mean old Ebeneezer Scrooges; it's one group of unelected Democrats (the union bosses) that donated money to get the other Democrats whom they'll negotiate with elected.  Money flows back and forth between the unions and politicians, and it's money fleeced from the taxpayers.  It's the closest thing to a perpetual motion machine you'll see.  In a real negotiation, Ebeneezer Scrooge has real money at stake, money that's arguably his to do with as he chooses; with government employee unions, both parties are arguing over OPM - Other People's Money (the most addictive drug known).

Getting back to the main story, the court included a major change in their ruling.  They said that union membership needs to be "Opt-In" not "Opt-Out"; employees have to join the union willingly.  In doing so, they recognized the union dues were essentially a mandatory fee to get their job.

There are indications the unions are running scared over having this little scam broken down.  There are also indications that these unions are facing tough financial times even without the loss of this income from mandatory dues.  The AFL-CIO launched a national advertising campaign in advance of today's decisions, trying to sell the idea of union membership - maybe they should have been doing that for years.  I'm not sure this ruling affects all people getting union dues taken out of their pay against their wills, but I hope it does. 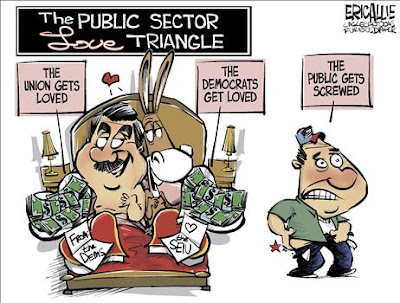 Eric Allie, from Townhall.com in 2011.  I used this in an article on union thugs and this incest.