Finally Done With The Replacement

The replacement for the cylinder I ruined about two weeks ago is complete and ready to put aside for later (except for a little cleanup).  This is it immediately after the last cut completed; not cleaned up at all. 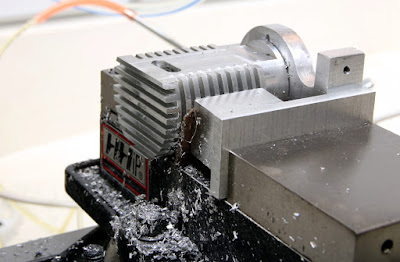 The fins and slots in the end are matched to those on the diameter of the cylinder: 3/32 (.094") wide with 3/32 spaces.  Just as the slots on the diameter were cut to 3/32 wide with a cutoff blade in that width, for these I had to buy a slitting saw blade that width.  I had some trouble with the first slot and didn't realize what was wrong for an embarrassingly long while, (the spindle's R8 taper was loose) so the first one has varying widths - which you can see if you look at the right end of the cut (the bottom).  It's a little stepped.

After the first one, I decided it would be smart to write a little G-Code to eliminate the possibility of entering the wrong commands.   I lowered the slitting saw the expected amount, just barely cut into the end about .003 or .004, then used calipers to verify the fin being started was the right thickness.  If it was off slightly (the second one was off because it referenced the first slot), I corrected it, then ran the code to cut the slot.  Each slot took almost exactly 6:00 minutes.

Somewhat cleaner at this point, just not deburred, yet. 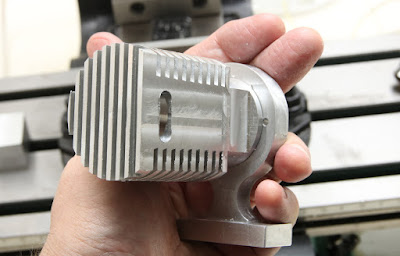 There are some marks from being in the vise that I need to either address or live with, and it has a bit of oil residue on it.  A little cleanup is needed.

The next part is probably going to be the flywheel.  At 3-1/2" diameter, it will be the largest thing I've ever put on a lathe.  I not only had to buy a larger chuck for my big lathe, I'll have to use the "outside jaws" on it.  Aside from size, though, it will be just like the one I drilled on the rotary table for my first engine.