On Saturday, Sen. Bernie Sanders (I-Vt.) declared war on Mickey Mouse. The self-declared socialist launched an assault on Disney for not paying its workers enough, just as minimum wage increases have hurt local economies and Sanders' own liberal state of Vermont has worse inequality problems than Disney.

"We need to shame Disney," Sanders declared at a rally in Anaheim, Calif. "I want to hear the moral defense of a company that makes $9 billion in profits, $400 million for their CEOs and have a 30-year worker going hungry."

You can tell this is either preparation for a 2020 primary run or simply dementia because Sanders is also lying about Disney's union contracts. Disney has already promised to increase wages for Disneyland workers to $15 per hour in under two years - by 2020.  Amid ongoing union negotiations, Disney offered an immediate pay increase to entry-level employees to $13.25 per hour, up from $11 currently.

Over five years ago, I wrote that I'm so tired of this issue that it's hard to even write about it, and I'd already written several pages on it by then, the third year of this blog.  In essence, those of us who oppose federal wage control like minimum wage laws always predict that it's not actually going to help people.  The laws are passed, the predicted bad things happen, and the answer is always to raise the minimum wage higher.


I'm tired of arguing over this issue because, to be honest, I'm always right and I always lose.  I'm right because I say it will cost the jobs of the people it's trying to protect and it will lead to inflation.  Those things then happen.  And I always lose because not enough politicians have the guts to stand against a minimum wage increase.

Which is why I say it's declaring war on reality.  Sanders argument, and the argument of all income redistributors, is that the company is making a profit so therefore they should be paying their workers more.  Disney, though, is a publicly traded company (DIS) and they are legally obligated to work for the financial interests of their investors.  The balance of how much the company should pay in dividends or other things counted as returns on investment (like stock splits) vs. the financial needs of the company is not a trivially easy question.  Companies have to balance their expenses vs. their income and a host of other things.  The idea that there should be no profit is pure idiocy.  Why would anyone go into business if there's nothing in it for them?

If history teaches us anything, it's that the free market is better at solving problems like wage levels than big governments.  We can cite examples all day, but here's a few.  There are places all around the country where higher minimum wages have been mandated.  The amount of troubles they've had are directly related to how much increase was mandated.  Seattle workers found they had less pay when the hourly wage went up.  Some lost their jobs as the companies went out of business.  There's a similar case study between Wisconsin and Minnesota that shows where the minimum wage was mandated higher, job growth lagged behind.  The kicker is that Minnesota's minimum wage law wasn't as bad as Seattle's, yet it still happened.  How long before all minimum wage jobs become robots and self-service kiosks? 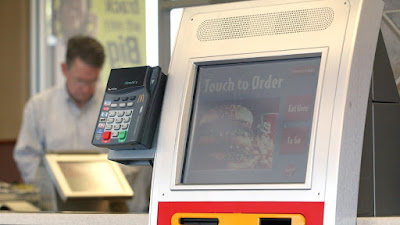 The guys at Values & Capitalism mentioned an aspect I'd not thought of.  Big companies, like Disney, are better able to handle these laws than smaller companies.  In their example, minimum wage was increased from $9 to $15/hour, the equivalent of a $12,500 per year tax.  The small restaurant, the small business can't ignore that.


Some advocates of the $15 minimum wage wish to “stick it to the man,” hitting the billionaire CEOs. This small business CEO, however, claims that “last year, my employees made more than I, the owner, did. I am still trying to pay off the line of credit that got me through the recession.”

Could big businesses be part of the minimum wage talk?  We've seen many times that big businesses are in favor of "lawfare" and using the law to keep small companies from becoming a threat to them.  It's not out of the question.

This week, we read that medicare is going bankrupt sooner than expected; Bernie and the Evil party are still saying Medicare for all.  People who can't understand what you just read rally for it, just as they rally and strike to hurt themselves by raising the minimum wage.  We try to tell them it's not going to work out the way they think, like we'd tell a 6 year old they really shouldn't stick their finger in that candle flame, and they respond by calling us "Hatey McHater".