There it is: the headline I've been waiting to write for days.  Thank you! Thank you! I'll be here through the weekend.  Remember to try the veal parmigiana, and for God's sake, tip your waitress.

The real story is that the Miss America competition is being reformed in this "PoundMeToo" age and they're going to drop the swimsuit competition.


ATLANTIC CITY, N.J. –  The Miss America Organization is dropping the swimsuit competition from its nationally televised broadcast, saying it will no longer judge contestants on their appearance.

The competition began nearly 100 years ago in Atlantic City, New Jersey as a bathing beauty contest designed to keep tourists coming to the seaside resort in the weekend after Labor Day.
...
Gretchen Carlson, a former Miss America who is head of the organization's board of trustees, made the announcement Tuesday on "Good Morning America."
...
"We're not going to judge you on your appearance because we are interested in what makes you you," she said.

Can they survive? Mrs. Graybeard summed it up about as well as can be when she said, "men watch the pageant for swimsuits; women watch it for the gowns, fashions and the other stuff. Each one has something to watch if the other turns it on first. What happens to that audience?"  Which is too bad, because Miss America is also dropping the evening gown competition.

For her part, Gretchen Carlson doesn't think it will make any difference.  She said, "the swimsuit portion is not the highest rated section of the broadcast. Viewers seem to be more interested in the talent competition," adding


“We are no longer a pageant, we are a competition,” she said. “We will no longer judge our candidates on their outward physical appearance.”

Perhaps not surprisingly, the actual contestants - present and past winners - aren't uniformly considering it a good change.   Lea Schiazza, a former Miss Pennsylvania, asks if her winning a swimsuit competition trophy is now something that makes her "not good enough" now.


People have been arguing for years over the validity of a competition that awards scholarships for T-and-A. Feminists say there is no place for it in today’s society. People who have never been in a pageant say that the women are being exploited by walking down a runway in a swimsuit and high heels. And women who are supposed to be supportive of other women’s choices, find it all degrading and humiliating.

I say, walk a mile in my high heels and bikinis. I’d like to say two other words to them, but I don’t like confrontation or getting beat up.

Similarly, 2013 Miss Georgia, Carly Mathis, took to Instagram to voice her displeasure, saying “But if I’m going to make my mark on history at least I did it looking like this.”  Contrast them with Heather Kendrick, who held the title of Miss Michigan 2017, and praised the shift


With the move, Kendrick said, “we are taking the focus off of physical appearance and on to what’s in our brains and what’s in our hearts, and that’s really what Miss America is and stands for.”

To be honest, it has been so long since I've watched a pageant on TV that I didn't really know they were still broadcast.  My prediction is that they may have a ratings bounce this year as people tune in to see just what the new competition looks like, but I suspect they'll loose whatever audience they have now.  Will they generate a new audience for the new product they're selling?  We'll see. 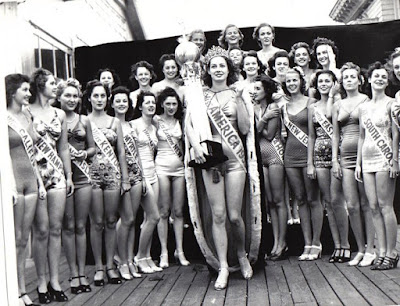