Improving the Performance, Reliability and Cost of Fuel Cells

I was mildly surprised to find the most recent thing I'd written on fuel cell cars was back at the very end of 2015.  That piece was based on a Design News post that said for fuel cell vehicles to be successful, fuel cell costs have to come down.  I'm interested in the technology, and I think someone should be researching them, I just don't think it's the federal governments place to use tax money for this research.

This is the province of fundamental engineering research in universities, probably funded by companies with interest in commercializing the technology.  Power Electronics magazine runs a piece on some of the work this week.


To meet this need, R&D at several U.S. universities and national laboratories is focused on making fuel cells a more widely used energy source. Some of this R&D is in the basic research phase, some is more advanced. This R&D is complex because it combines chemical and electrical disciplines, so it needs scientists with an understanding of both. And, sometimes it is hard to find people with this inter-disciplinary background.


Ajay Prasad, director of the CFCR, says, “Hydrogen-powered polymer electrolyte membrane fuel cells have already demonstrated the potential to replace internal combustion engines in vehicles and to provide power in stationary and portable applications.” He notes that a major challenge to commercialization of this technology is the durability of the membrane, which is typically made from a polymer called Nafion. During fuel-cell operation, the membrane undergoes chemical and mechanical degradation, leading to cracks and pinholes that shorten its life.

Prasad and two colleagues from the UD Department of Mechanical Engineering, Liang Wang and Suresh Advani, have developed a self-healing membrane incorporating microcapsules prefilled with a Nafion solution. A patent application has also been filed. “The microcapsules are designed to rupture when they encounter defects in the membrane and then release the prefilled Nafion solution to heal the defects in place,” Liang Wang explains. 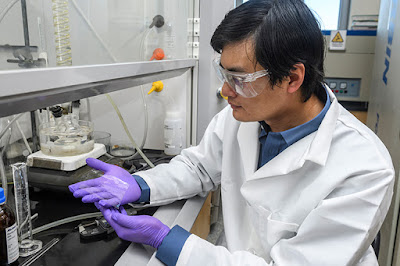 Lian Wang with a sample of their enhanced polymer.  Power Electronics photo.

Test results have shown the newly invented membrane with the self-healing property could greatly extend its useful life.  A prototype fuel cell system using this technology is currently being tested in an all electric bus, run by the University of Delaware.  It's not a typical fuel use, as far as I know: the bus runs on a 300V NiCd battery pack, and the fuel cell provides recharging for those batteries, making the fuel cell system a range extender.  The fuel cell, by the way, runs on 16kg (7.3 lbs.) of hydrogen stored at 5000 psi.  That piece I linked to on fuel cell cars talked about 11 lbs. of Hydrogen in 10,000 psi tanks in a Toyota electric car. 10,000 PSI anything sounds scary to me.

Next stop is Georgia Tech Research Institute’s (GTRI) Center for Innovative Fuel Cell and Battery Technologies, where researchers believe that understanding how and why fuel cells fail is the key to both reducing cost and improving durability.


Center director Tom Fuller has been trying to solve what he deems the top three durability problems since he joined GTRI from United Technologies in 2004. “My philosophy is that if we can really understand the fundamentals of these failure mechanisms, then we can use that information to guide the development of new materials or we can develop system approaches to mitigate these failures,” said Fuller, who is also a professor in Georgia Tech’s School of Chemical & Biomolecular Engineering (ChBE).

One of the problems Fuller is addressing includes the chemical attack of the membrane. In a typical fuel cell, hydrogen is delivered to the anode side of the cell that contains a catalyst, such as platinum. The platinum splits the hydrogen molecules (H2) into hydrogen ions and electrons. On the cathode side of the fuel cell, an oxidant such as a stream of oxygen or air is delivered.

In an interesting comparison to the University of Delaware research, GTRI researchers also find that damage to the membrane in the fuel cell is a root cause problem they're fighting.


Fuller’s research shows that the membrane, commonly made of a synthetic polymer, is prone to attack by free radicals that create holes in the barrier. The free radicals are formed by the decomposition of hydrogen peroxide (H2O2), a strong oxidizing chemical that can form near the membrane. Perhaps the work done at the University of Delaware can solve this problem.

There's more in the article at Power Electronics, but I think I've hit the most interesting parts. They write about involvement of the Department of Energy's Oak Ridge National Labs (ORNL) in Tennessee and tests at the The National Renewable Energy Laboratory (NREL).

It sounds to me like basic research, with small scale testing going on, and therefore a couple of years before fuel cell makers can tell if this is progress or not.  There's nothing in the article about the costs of these cells, which seems to go with the immaturity of the technology.

At this point, there's nothing to lead to a solid prediction of costs reaching "commodity level", not the current astronomical costs that lead to the automakers being unable to profit on a fuel cell electric vehicle even including the Federal subsidies they get. 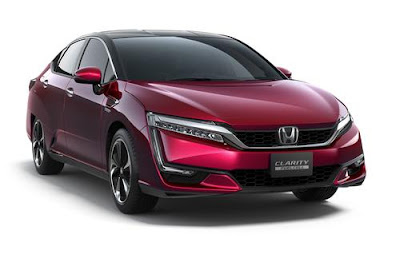 Honda Clarity, fuel cell powered EV.  It appears these can be bought now in limited areas, but there isn't much hydrogen infrastructure around, either.

Posted by SiGraybeard at 8:42 PM