Confidential to the SAF: Fire Your Ad Agency!!

Let me start here:  I really respect the Second Amendment Foundation.  I know I've donated to them in the past.

Since the crap of the last months, the abandonment of Florida gun owners by the GOP establishment (the Truly Stupid Party) and the rest, I've been thinking about new groups to support.  On the face of it, the SAF has a good pedigree.  The SAF, after all, is the organization that took McDonald v. City of Chicago to the Supreme Court and won (pdf warning).  All together, the SAF has been involved in more important progress and legal victories for the pre-freedom side than any other group I know of.  More here.  It's important to know, the SAF isn't perfect either.

The thing that bothers me is that every time I'm ready to push the button or write the check, I get some horrible click-bait style, snail mail solicitation from them.

They write like they're trying to attract the absolute lowest IQ voters.  Today I get one that is made up to look like it's some sort of jury-duty related thing.  Seriously.  In big bold letters it says, "Official Jury Ballot Enclosed"; then it's emblazoned with something similar to crap you get on the junkiest of junk mail; it reads like a warning to the postal service.  Rather than describe it, let me show it to you. 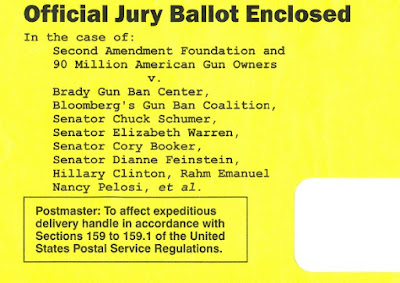 Does anybody associate anything but low-budget, bulk-rate junk mail with that?

The inside is just as bad, with single sheet made up to look like a legal draft except for the large bold font at the top declaring it a "Juror Ballot".   It's a "survey" set up to get you mad at the Brady Bunch, Bloomberg, Schumer, Feinstein, Pelosi, and the usual cast of villains so that you'll send in a check.

Again: does anybody take this kind of stuff seriously?

I can't tell you how many times I put aside an envelope with some low-brow marketing scam in it from the SAF and thought that maybe I'd be less annoyed with them later, but never got past it.  After all, when we respond to this crap, we're rewarding them for it.

Yo, Counselor Gottlieb: talk to us like we didn't just crawl out from under a rock.  Your ads come across as thinking less of gun owners than Bloomberg, Brady, or any of those parties that you list think of us.

Maybe it's worse than I thought.  According to the Wikipedia, Allan Gottlieb might be the owner of the company that's doing this atrocious advertising.

Gosh, if he owns a "direct response mail fund-raising business" I'll bet chances are pretty good that's the business that's the ad agency I'm asking him to fire.  Yeah, I know enough about business that it's easy to think a guy who owns all the businesses he does isn't familiar with this level of detail of the various operations.