The actual story is that the DOE has agreed to $72 million dollar funding of another concentrated solar power system like the famous Ivanpah facility in the California desert.  Ivanpah is famous for incinerating birds that come to feed on the insects being incinerated by the solar concentrater.

The goal of the project is to increase the temperature of the working fluid up to 700 C (1292 F).  Ivanpah and some other facilities run at temperatures from 300 to 550 C.  Concentrated Solar Power (CSP) systems are more efficient the higher the temperature difference they work with.   Increasing the temperature to 700°C promises greater efficiency.  They're calculating they could reach 50% efficiency.


Light beams can be concentrated by refraction through a lens (a magnifying glass), or through curved mirrors, to produce extremely high temperatures. Commercial scale CSP facilities like the recently completed Noor I power plant in the Sahara Desert in Morocco use 500,000 crescent-shaped mirrors that track the sun across the sky. Noor I can produce up to 160 megawatts while operating at almost 400°C. Similarly, Ivanpah, the world’s largest CSP facility—located near the California and Nevada border—has 300,000 mirrors that concentrate the sun’s energy onto three 459-foot-high towers. Power production from the 3,500-acre Ivanpah site is rated at 377 megawatts with operating temperatures as high as 565°C.

The reason they're funding this as research is that the current technologies, which use molten nitrate salts to transfer the heat, won't work at the higher temperatures.  The setup is a competition between three contenders that will be tested by different teams:


Over a two-year period, each team will develop and test materials, concepts, and critical components using its assigned thermal transport technology. Each will also create detailed plans to build an integrated CSP facility. At the end of the two-years, one of the technologies will be chosen to move ahead with the construction of a $25 million pilot facility over a period of three years.

I find it curious that nobody is talking about using molten sodium (metal), which has been researched extensively by the nuclear power industry (remember KRUSTY the NASA nuclear power project? It used molten sodium).  Sodium melts at conveniently low temperature, 97.72 C (207.9F) and doesn't boil until 882.85 C (1621F).

The big picture is that the DOE is trying to drive more energy production to solar, and if they achieve 50% they'll be doing better than practical photovoltaics (PV; solar cells) do.


The CSP project announced is part of a bigger effort on the part of DOE to drive the cost of solar energy down. For example, the target for the cost of PV is $0.03 per kilowatt-hour (kWh) by 2030. The CSP target is $0.05/kWh by 2030. But the PV costs do not include storage, where the storage and ability to generate electricity when the sun isn’t shining is built into the thermal CSP system. Shultz notes that if a plant has 12 or more hours of thermal energy storage capacity, then it can operate on the order of 70% of the time. But a PV without storage can only operate 20-25% of the time. “What we see, if we hit these targets, is that CSP seems to have a lot of value,” said Shultz. 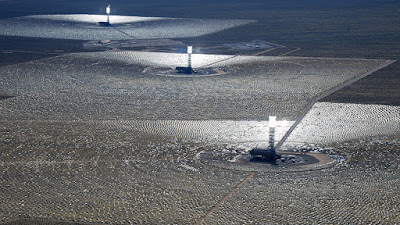 We can argue this isn't a valid function of the federal government, but that's like arguing that minimum wage laws harm workers and raising the minimum wage will cause inflation.  In both cases we'd be right and nothing would change.