More Stuff for Your Shocked Face

If I may remind you of a daily outrage from earlier in the week; remember the one in which DHS Secretary Kirstjen Nielsen was out at a restaurant having dinner and got harassed by self-described socialists?  It was an ugly scene, entirely in keeping with the way the Deranged Resistance is behaving itself.

It turns out one of those deranged socialists is employed by the Department of Justice.


Allison Hrabar, a member of the Democratic Socialists of America who attended the protest against Nielsen over the controversial border law enforcement, was revealed to be a paralegal specialist at the DOJ, the Washington Examiner reported.

“It feels really good to confront people who are actually responsible, which is what we have a unique opportunity to do in D.C.,” the DOJ worker told the outlet.
....
Hrabar wasn’t bothered by her association with the DOJ, citing her protected First Amendment rights to protest anyone outside her work hours. She went on to encourage people to confront officials in public places.

“If you see these people in public, you should remind them that they shouldn’t have peace,” she said. “We aren’t the only ones who can do this. Anyone who sees Kirstjen Nielsen at dinner, anyone who sees anyone who works at DHS and ICE at dinner can confront them like this, and that’s what we hope this will inspire people to do.”

According to today's news, they've decided it's not enough to protest Nielsen and her family when they're in public; the protesters have chosen to follow her to her home and harass the entire family by playing loud recordings of babies crying.  Undoubtedly disturbing not only the Nielsens and their children, but also neighbors and their children.

Hrabar has a point about her not being required to give up her rights to her stupid opinions to get a job.  She does have a right to be stupid, but exactly how she's allowed to express those opinions are not beyond the purview of her employer.  It's not uncommon in the private sector to be required to put a disclaimer on things posted in public that you're not speaking for your employer.  Besides, the Daily Caller reports that Hrabar has made a habit of using social media to send political messages during her work hours,


Despite Hrabar’s claims of keeping her personal politics outside of her time as an employee of the federal government, a look at her Twitter account, @allisongeroi, features tweets during the workday openly celebrating her behavior Tuesday night.

Let's play the game that a tweet that's time tagged at 1:56 PM was during work hours and not on a break or even lunch time (how do we know what hours she works?)  Chances of a government employee being disciplined on the job?  Sure seems to be just about zero. 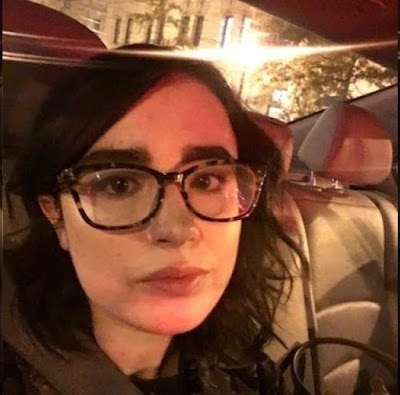