A Less Hazardous Replacement For TNT?


From the I Did Not Know That file, I didn't know that TNT, a rather commonly used explosive, is considered a carcinogen.  Apparently not just in California where it seem that everything causes cancer according to the labels on things I buy.

TNT is a well known explosive; I'd swear I first heard of it on Looney Tunes as a kid.  It's also one of the first modern explosives: first made in 1863.


TNT (aka trinitrotoluene) was first prepared in 1863 by German chemist Julius Wilbrand, but its full potential as an explosive wasn’t discovered until 1891. It has been in use as a munitions explosive since 1902. But the Environmental Protection Agency lists TNT as a possible carcinogen, and exposure to it has been linked to disorders of the liver and blood, according to the Centers for Disease Control. So, the Army and the Dept. of Energy have been looking for a replacement that is less toxic than TNT, packs a bigger explosive punch, and has a low melting point, which will let it be safely heated and cast in different shapes and sizes.

TNT is a preferred explosive because of its relative stability.  It's less sensitive to shock and friction, with lower risk of accidental explosion compared to more sensitive explosives such as nitroglycerin.  TNT is usually combined with other substances in blends of varying percentages.

It's easy to make fun of this, with the idea that something that blows you to bits might give you cancer in 20 years, but the people being blown up by the TNT aren't the people this is concerned with.  The people who make and handle TNT, along with people who live near factories that produce TNT are the ones they're trying to protect.  The researchers have found a molecule, too, it just doesn't have as easy and catchy a name as TNT or C4.  It's called bis-oxadiazole, and similar to how TNT is a nitrogen-containing compound, this 24-atom molecule is packed with nitrogen.  The article claims it has 1.5 times the explosive power of TNT.

TNT has a simple structure.  In the center, there's a six carbon benzene ring with nitrite groups (NO2) in three places and one methyl group CH3 between two of the nitrite groups.  In this view, carbon atoms are black, hydrogen atoms are gray, nitrogen is blue and oxygen red.  There's a total of 21 atoms in it: 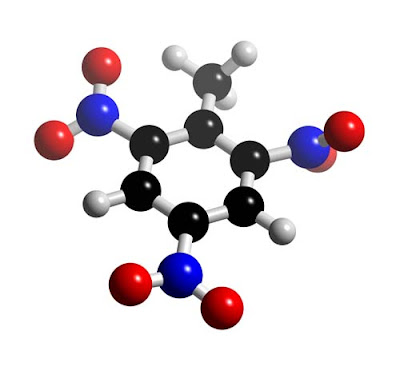 The bis-oxadiazole, top view shows a single atom.  Notice that each molecule has six nitrogen atoms, twice as many as TNT has (same color code).  Bis-oxadizaole forms into crystals as shown in the bottom view: 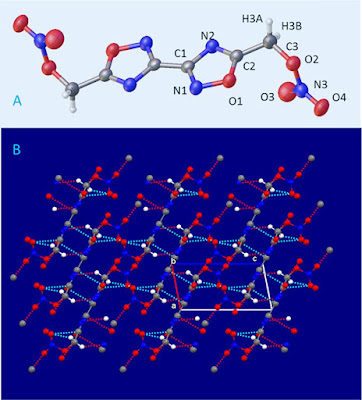 The challenge since its discovery has been getting a high enough yield of the explosive out of the synthesis process.  Early attempts at making it had only a 4% yield, far too low to be practical and affordable.  After continuous refinement of the process, they got the yield up to 44%.  There will be additional studies and efforts to reduce the cost per pound before there's a shift to the new explosive.  Along with studies of toxicity and health effects.