Long before I stared hearing talking heads pontificating on America's addiction to outrage (early example), I started referring to news stories as The Outrage of the Day.  Actually, I think the first place I read the concept was Michael Crichton's book, "State of Fear" - a thriller that I literally couldn't put down.  How bad was I hooked by that book?  I brought an eBook version on a company trip (on a Palm Pilot - this was before Kindles or iPhones) and my batteries ran down mid-trip, so I bought the paperback in the airport bookstore to keep reading.

Today's Outrage of the Day is, of course, about the policy of separating children from their parents if the parents are bringing them across the border illegally.  This was apparently passed as a law in the the late 1990s, but the politicians told the Border Patrol not to enforce it.  We're fed images by the 24/7 news cycle that are supposed to stoke our outrage, and get us to keep watching.  When I start to sense, even remotely, that I'm being played with intent to foster outrage, I tune it out.  Change the channel or leave the room.  Much as I couldn't stomach watching Reichsmarshall Hogg and the Parkland version of Our Gang, I can't stomach watching coverage of this outrage.

The outrage is the product of our broken, dysfunctional political system (bet you thought I was going to say immigration system, didn't you?).  Simple question: why is the immigration system "broken"?  If the Evil Party cared about it, they could have rammed laws through to change it to their liking in 2010 and '11 when they had unbreakable majorities in both halves of the legislature and the White House.  The Stupid Party couldn't have done it since last year because they haven't had a filibuster-proof majority in the Senate.  I believe the reason we have this mess is because both parties use the brokenness to their advantage.

There's a handful of issues like this that the parties use to play "normies" like us, including normie Evil Party members, against each other, and to fund raise.  They will never let those issues be resolved.  The other side of "why is the system broken" explains how Trump has reversed the majority of the Obama "legacy".  Obama did most of that with his famous "I have a pen and a phone" approach, by Executive Order, and while "stroke of the pen, law of the land" might be cool, it won't last.  When the other side takes power - and with a two party system they inevitably will - all of your agenda gets wiped out with a stroke of the pen.

For an administration that is going to follow the actual process for passing laws, real change of passed laws is hard.  It's why we still have Obamacare.  Here we have a law that was passed without one vote from the opposition, a law that the opposition-controlled house voted to repeal about 47 times when they knew it meant nothing but couldn't bring themselves to repeal when their votes actually mattered.  Real laws passed by the constitutional process are harder to get rid of than executive orders and executive branch agency regulations, like "net neutrality".

Note that "they will never let those issues be resolved" goes for the most austere gun control.  The left feeds off the anti-gun zealots and their money much more than the right feeds off the NRA.  If they did get enough idiots to pass a law to do a Feinstein and say "turn them all in", they'd never get another penny and lose their psychological leverage.  This is totally ignoring the civil war that would start and the ugliness that would follow.

The psychopaths' game is to find something that really matters to their supporters and get those people so outraged that they'd do anything to vote against the other guys.  From the psychopaths' standpoint, outrage is a good thing.   People don't think critically when they're that outraged.  They won't ask tough questions and will accept pablum from the media.

While the book "State of Fear" was about climate change and eco-terrorism to scare people into voting their way, the title was from a chapter late in the book where characters are discussing the 24/7 news cycle and how much it feeds on fear and speculation, in attempt to keep viewers tuned in.  The book was released in 2004 and it's more true now than it was then. 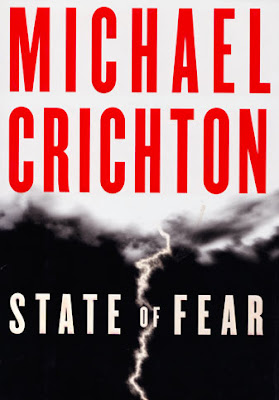